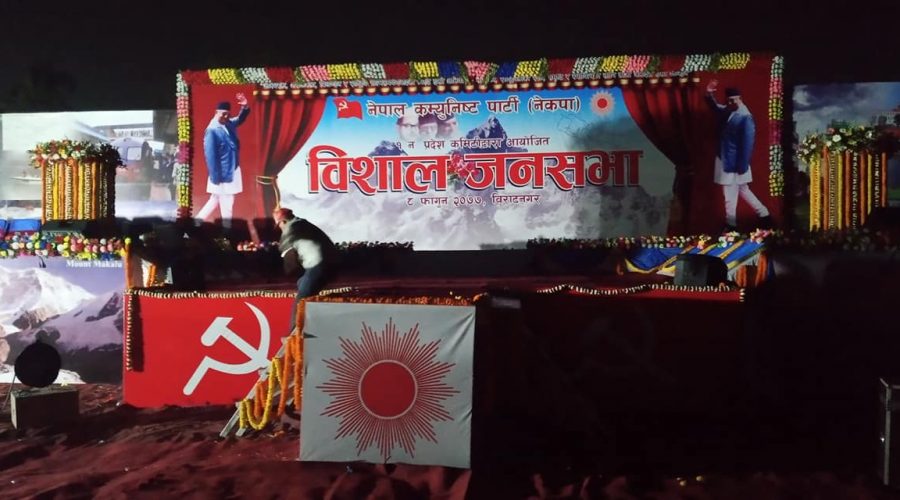 According to CPN central member Binod Dhakal, top leaders of the party including Prime Minister Oli are scheduled to address the General Assembly in Biratnagar this afternoon.

After the dissolution of the parliament, a General Assembly is being held for the first time in Biratnagar, the capital of Province 1 with Prime Minister Oli as the Chief Guest.

Central member Dhakal said that more than two hundred thousandd activists would participate in the public meeting held at the ground on the east side of Birat Nursing Home at Biratnagar Metropolitan City-2.

According to Central Member Dhakal, 1,500 public buses have been arranged at the local level in the main city of the state for those attending the public meeting. Besides, it is estimated that 10,000 supporters will come on motorcycles alone.

Demonstrations will be taken out from intersections of Kanchanbari, Roadshesh, Tinpaini and Hatkhola in Biratnagar for the General Assembly. After addressing the Assembly in Biratnagar, Prime Minister Oli is scheduled to return to Kathmandu at 4 PM today.

Earlier, the Dahal-Nepal faction of the CPN had held a protest rally in Biratnagar.

Security has been increased in Biratnagar after top leaders, including Prime Minister Oli, arrived as the chief guest.

In Biratnagar, security arrangements have been made by all four security agencies Nepal Army, Nepal Police and Armed Police Force and National Investigation. A large number of security personnel have been deployed in Biratnagar since this morning.

The presence of Nepal and Armed Police Force has been intensified in some areas. A similar number of plainclothes security personnel have also been deployed.

A Nepal Army team has been deployed in plainclothes to strengthen security arrangements. Morang Police Chief SP Santosh Khadka said that security has been tightened in and around Biratnagar.

“We have already strengthened the security arrangements,” he said.