COVID: A speed-breaker for the economy 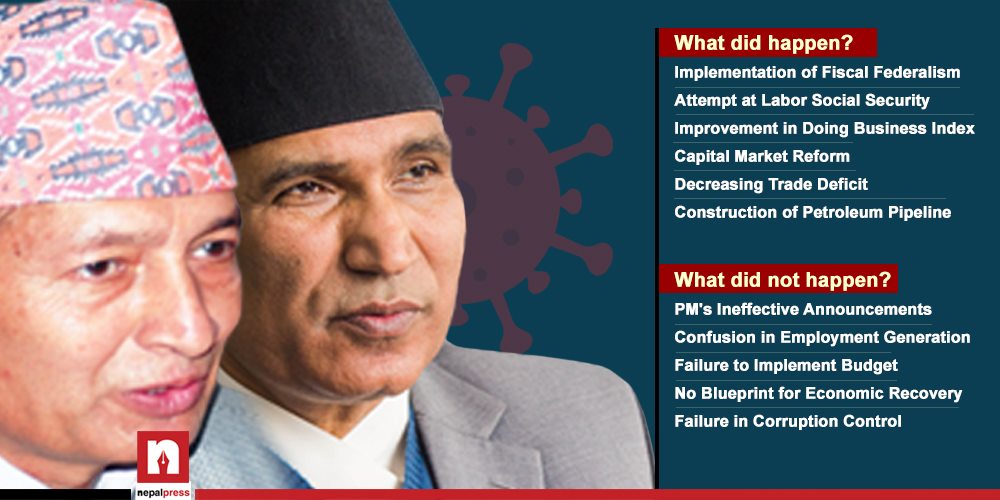 KATHMANDU:  The journey that the KP Oli-led government set out on with the slogan ‘Prosperous Nepal, Happy Nepalis (Samriddha Nepal, Sukhi Nepali)‘ has crossed its three-year mark. As the country got a majority government after a long time, people expected economic transformation. However, economic agendas have been overshadowed by recent political turmoil.

From an economic point of view, the Oli government has not been able to achieve desired results in these three years. However, over the past year, the economy had been on the mend before the pandemic sent the economy into a tailspin. The import-export imbalance was declining in the Fiscal Year 2075/76 with an encouraging growth rate of 7 percent. However, COVID badly struck the economy last year.

The government has presented the 15th plan with long-term vision and has set a target of 10 percent annual economic growth by 2100. But from today’s point of view, that goal seems far away.

In these three years, there have been efforts to boost the economy. The government has also had success in some areas. However, the fundamental problems of the economy remain the same.

For more than two and a half years of the three years, Dr. Yubaraj Khatiwada served as the Finance Minister. When an economist took over the reins of the Ministry of Finance, people had high hopes. Although he did not achieve expected results, he tried to bring the economy into the right track in terms of policy. However, due to political pressure, he failed in some decisions.

The impact of COVID-19, which started in China in 2020, hit Nepal’s economy hard. This hampered the implementation of last year’s budget and the situation is still not completely smooth.

In the last three months, Dr. Khatiwada has been replaced by Bishnu Poudel. Although Poudel, who has become the Finance Minister for the second time, is not an economist, his start can be considered good enough. As a political figure, Poudel is running the Finance Ministry differently than Khatiwada. Khatiwada had presented the budget for three Fiscal Years (FY 2075/76, 2076/77 and 2077/78). Poudel will bring in the budget for the next fiscal year.

The disease of Nepal not being able to implement the capital expenditure announced by the government in the budget is an old one. Even this government could not find a cure for this. The condition of implementation of capital budget in all the three fiscal years is not satisfactory. In recent times, it has been badly affected by COVID.

The budget for the Fiscal Year 2075/76 was Rs. 1315 billion. Out of this, it was targeted to spend Rs. 845 billion for current expenditure, Rs. 313 billion for capital expenditure and Rs. 155 billion for financial management. The budget set a growth target of 7.5 percent.

However, the size of the budget was reduced to Rs. 1278 billion through the mid-year review. Only Rs 1084 billion was spent. The government claims that the economic growth had been around 7 percent in that fiscal year. This is close to the goal. However, the government was unable to spend on development on time. Most expenses were incurred in June. Even so, 22 percent of the development budget could not be spent.

The budget had set a growth target of 8.5 percent. But the expenditure of this budget, affected by COVID, remained weak. Only 46.34 percent of the capital budget has been spent. Economic growth slowed to 2.27 percent last year due to COVID.

Achievements of the three years

End of Load Shedding: Nepal was declared a load-shedding-free nation on 14th May 2018 under the leadership of Chief Executive Director of Nepal Electricity Authority, Kulman Ghising. As people who had been languishing in the dark for 15 years were soothed, the industry was greatly relieved.

Investment Conference: In 2075 BS, an investment conference was organized with the involvement of about 30 nations. The current Governor of Nepal Rastra Bank was the Chief Executive Officer of the Board of Investment at that time. The conference secured foreign investment in 64 projects.

Social Security Program: The program to include the private sector in the social security program was started under the leadership of the then Minister of Labor Gokarna Bista. It intends to provide employment-based pensions to workers in the formal and informal sectors. After the announcement of the program, a social security fund was established. However, due to the reluctance of the private sector, the program is not succeeding as expected.

Construction of Petroleum Pipeline: During the visit of Prime Minister KP Sharma Oli to India, an agreement was reached between Nepal and India to build a petroleum pipeline. Accordingly, construction of 69.2 km pipeline from Motihari in India to Amalekhgunj in Nepal has been completed. This is a rare project that was completed ahead of schedule.

Dhalkebar-Muzaffarpur Transmission Line: The construction of the largest 400 KV substation in Nepal has been completed and the Dhalkebar-Muzaffarpur Transmission Line has come into operation. The substations built with the joint investment of the Government of Nepal and the Electricity Authority and the concessional loan of the World Bank have a capacity of 400, 220 and 132 KV. It was inaugurated by Prime Minister KP Sharma Oli on 2nd February.

Capital Market Reform: Former Finance Minister Dr. Yubaraj Khatiwada has been repeatedly criticized for his conservative attitude towards the capital market. However, he took the initiative to implement a 58-point capital reform program led by NRB Deputy Governor Shivraj Shrestha to reform the capital market. The current online system of NEPSE has been implemented during Khatiwada’s time. The stock market has reached an all-time high of 2,556.86 points with a historic turnover of over Rs 10 billion.

Imports declined by 4.81 percent in the first six months of the current fiscal year compared to the same period of the previous year. Exports have increased by 6.14 percent. Thus, the overall trade deficit decreased by 5.8 percent to around Rs 600 billion.

However, many have questioned the legitimacy and effectiveness of this program. They have protested saying that the budget is being spent on weeding, cleaning sewers and chasing monkeys in the name of employment.

Where the government failed

PM’s ineffective announcements: Some of the high-priority plans of Prime Minister KP Sharma Oli are still incomplete. Although he has repeatedly talked about running trains and ships in Nepal, no concrete work has been done so far. Oli has been criticized for going beyond the issues connected with the people’s daily lives.

Confusion in employment generation: The government, with the slogan of prosperous Nepal and happy Nepalis, could not work on the most basic aspects needed for it. In particular, the government has failed to create jobs. The government did not pay attention to the operation of industries with government investment or to uplift the collapsing industries. COVID has created a huge employment crisis in the country.

No blueprint for economic recovery: COVID has weakened the country’s economy. Businesses are in crisis, and many lost their jobs. The government has not been able to come up with a concrete blueprint to boost the economy from such a situation. Although some relief programs have been launched in the affected areas, they have been inadequate. As a result, the recovery of the economy has become challenging.

Failure to control corruption: Prime Minister KP Sharma Oli has been making corruption control his top priority. Oli’s statement ‘I don’t look at the face of the corrupt’ is still popular. However, there were many corruption scandals during his tenure. In Transparency International’s Good Governance Index, Nepal has dropped from 113 to 117th place.

The impact of COVID-19, which started in China in 2020, hit Nepal’s economy hard. While this hampered the implementation of last year’s budget, the situation is still not completely smooth.

The lockdown issued by the government on 24th March 2020 as a precautionary measure had been extended for a long time. This brought all sectors of industry and business to a standstill. This lockdown has caused unimaginable economic damage to the country. Production, distribution, import, export, industry, trade, employment, agriculture, tourism and other sectors have been affected.

The biggest impact of COVID has been on the tourism sector. The visit year announced by the government had to be postponed. Due to this, the investment made in the preparation of the visit year was lost and so was the revenue that could be generated. Sources of revenue shrunk as industry and business could not come into operation. For some time, they were unable to collect revenue and were forced to pay their salaries.

The government has given concessional loan and electricity tariff exemption to Small and Medium Enterprises (SMEs) affected by COVID. However, the private sector does not seem satisfied with this.

What do experts say?

Former Deputy Chairman of the Planning Commission Dipendra Bahadur Chhetri says that the government has not been able to do anything remarkable in three years except raise hopes. He has remarked that the principles and practices of the budget brought by the government are not well aligned.

“All three budget targets were reduced through mid-year review. The government has been weak for three years in terms of capital expenditure. There was no discipline in budget spending,” he said.

Chhetri says that it is ridiculous to say that the dream of a Nepali to board a ship has come true by showing the boats plying in Koshi and Gandaki.

“This is a Prime Minister who announces a date for citizens to be able to buy ship tickets, but shows boats floating on the river,” he said. “How can it be said that the government has done a good job when it announces the start of projects that are not included in the plan, calls for contracts for construction but shows problems in land acquisition itself?” said Chhetri.

Another Former Vice-Chairman of the Planning Commission, Prof. Dr. Govinda Pokhrel also says that the government has not been able to do anything remarkable for the economy.

“The government led by Prime Minister KP Sharma Oli has not been able to do anything that will be memorable after 10 years for the economy in these 3 years. Laying the long-term foundation of the economy and its structural reform have not been paid attention to”, he said.

Stating that the government has increased foreign debt to Rs. 590 billion, he said that ample amount of foreign investment has not been able to enter Nepal.