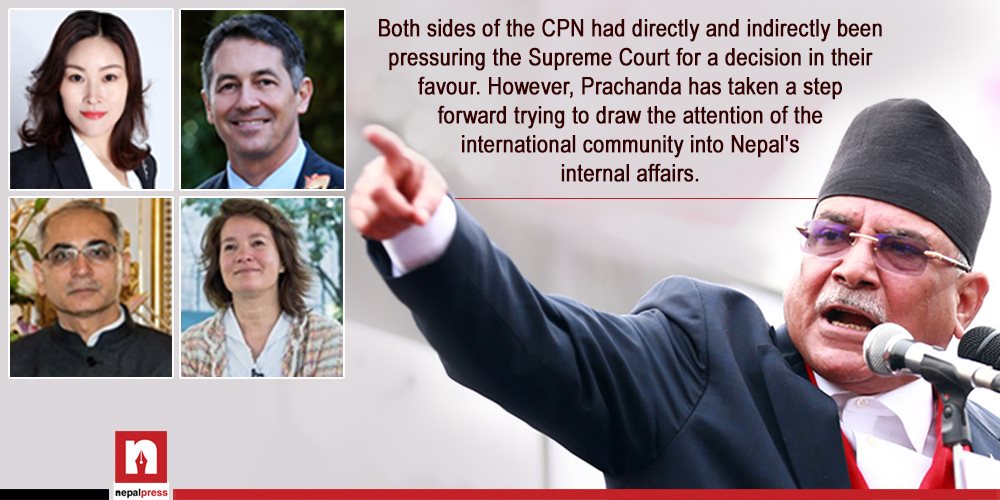 KATHMANDU: Speaking to the international media on Tuesday, Chairman of the divided CPN (Dahal-Nepal) party Pushpa Kamal Dahal ‘Prachanda’ sought the support of the international community on the issue of dissolution of the parliament. Claiming that Prime Minister KP Sharma Oli’s move threatened democracy, he said international support was needed to protect it.

“We urge the international community, including the major democratic countries and our neighbours, to speak out against Oli’s move,” he said.

From Prachanda’s statement, it can be understood that he is seeking the support of the international community against the dissolution of Parliament.

Both sides of the CPN had directly and indirectly been pressuring the Supreme Court for a decision in their favour. However, Prachanda has taken a step forward trying to draw the attention of the international community into Nepal’s internal affairs.

The international community is almost silent on Nepal’s recent political developments. India and China, the two most interested neighbours in Nepal, also consider it an internal matter of Nepal. When the CPN dispute reached its climax, China had tried to settle it till the end. India, on the other hand, has been accused of trying to turn one side against the other. However, after the split of the CPN, both India and China have remained silent.

India was the first country to respond after the dissolution of Parliament. Speaking at a regular press conference in New Delhi on December 24, Anurag Srivastava, spokesperson for the Indian Ministry of External Affairs, said that India was closely monitoring the political developments in Nepal and that making decisions in a democratic manner was an “internal matter” of Nepal.

‘As a close neighbour and a benefactor, India has always stood for peace, prosperity and development in Nepal. India’s support to Nepal will be regular ‘, Srivastava explained.

When US Ambassador Randy Berry interacted with a Nepali journalist on February 1, he sought feedback on the dissolution of parliament. He said it was too early to speak as the matter was pending in the court.

“The United States has always stood by democratic institutions. Sometimes these processes can take some time to take shape. It is because we believe in the process,” said Ambassador. Berry has repeatedly responded that the issue of dissolution of parliament will be decided by a court.

He said that the split of the CPN  and the internal strife within it would not be included in any country’s foreign policy. He remarked that political divisions and conflicts were part of the democratic process. He stated, “This is not our business.”

A special delegation from the Foreign Ministry of China, which landed in Kathmandu at the end of December after the split of the CPN, had suggested meeting the two groups of the CPN to maintain unity. Last year, Foreign Minister of China, Wang Yi expressed interest in Nepal’s political developments during a telephone conversation with his Nepalese counterpart Pradip Kumar Gyawali.

In a statement issued by the  Foreign Ministry of China on February 5, following talks between the two foreign ministers, Foreign Minister Yi said his country would not interfere in other countries’ internal affairs and would support the path of development desired by the Nepali people.

She said ‘The Supreme Court is the guardian of the Nepali constitution. “I am confident that the court will decide the way forward,”

The United Kingdom, another development partner with Nepal, has also remained silent on the political scenario that has emerged since the dissolution of parliament. According to the source, a virtual discussion was held two weeks ago with the ambassadors and representatives of the European, American and Australian embassies in Kathmandu and a common view was developed on the political developments in Nepal. However, the Ambassadors of China and India did not attend the talks.

According to sources, the purpose of the virtual gathering was to form a common view on the recent political developments in Nepal. However, there was no consensus in the discussion. The meeting was inconclusive as there was no consensus on whether to wait for the court’s decision or support the opposition. The lack of consensus means that the international community seems divided over Oli’s move. Because China and India did not participate in the discussion and no joint statement could be reached after the discussion.

However, Dahal, who led a decade-long armed conflict, still has the image of a “Warlord” in the international community. Europe and the United States, in particular, seem more sceptical of him. In February 2019, Dahal issued an outrageous statement against the United States for interfering in Venezuela’s internal affairs.

During the People’s War, Dahal used to call the United States and India imperialist and expansionist countries. Addressing supporters a few years ago, he remarked that Oli had dissolved parliament in consultation with India. His remarks were aimed at the visit of Indian intelligence chief RAW chief Samanta Goyal to Nepal before the dissolution of parliament.

Deputy Chief of Department of Foreign Affairs & Central Committee Member, CPN Bishnu Rijal said that it was natural for the party to support the international community in favour of democracy. Talking to Nepal Press, he said that he had met the representatives of international media while giving a general briefing on the situation. Rijal Sid “Oli’s move is undemocratic and unconstitutional. The message is that it attacks republicanism, federalism and secularism, It could be discussed with the international community. The decision has not been made yet, ”

Foreign affairs expert and former ambassador to France Mohan Krishna Shrestha says it is not necessary to involve the international community on the issue of dissolving parliament.

Shrestha explained”Internationalization is usually about issues between the two countries. This is an internal matter. As far as the dissolution of parliament is concerned, it is an internal problem. It depends on how you approach it. “

Washington Post and ABC News published news with the headline ‘Street protests continue against Nepal’s prime minister’.The American and Chinese media, including CNN, the New York Times, the BBC, and the Global Times, seem to value the protest more than Dahal’s international support.