Royalist Movement silent: Impact of parliament dissolution, or calm before the storm? 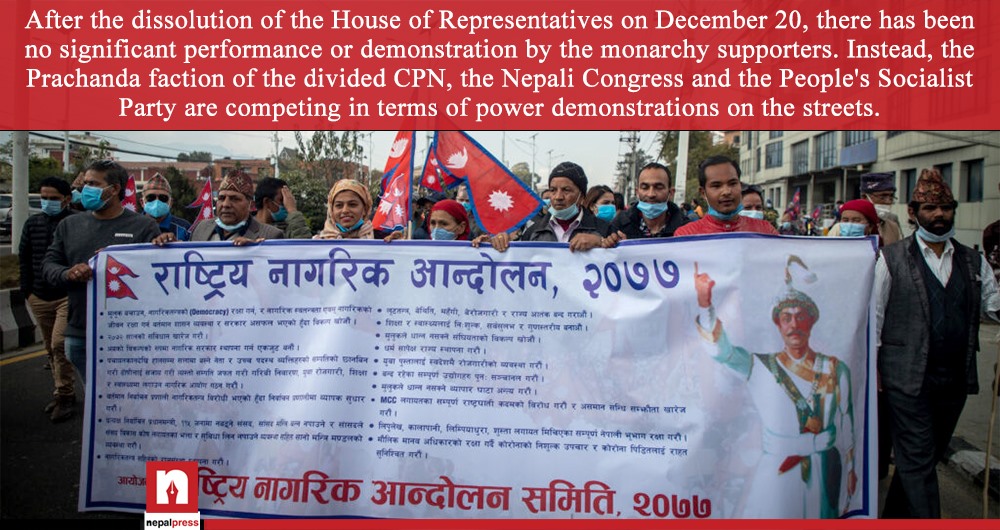 KATHMANDU: Last August, a decade after the establishment of Nepal as a republic, monarchy supporters suddenly took to the streets saying, “King, come and save the country.” There were indications that the movement started under the leadership of some royalist youths could spread across the country and take the form of a mass wave. However, with the onset of winter, the royalist movement has also cooled down.

Demonstrations against the Federal Democratic Republic were held in various cities of the country from August to December. The agitators demanded the return of Hinduism by abolishing secularism along with the restoration of monarchy in Nepal. Due to the remarkable mass participation in the movement, the attention of mainstream politics was drawn. Prime Minister KP Sharma Oli had convened an all-party meeting to discuss the issue, but, just as the movement suddenly arose, it died down likewise.

Apart from the Rastriya Prajatantra Party (RPP), no other mainstream political party in Nepal has carried the agenda of restoring the monarchy and the Hindu nation. However, the assembling of large crowds in a movement not led by a strong political force is significant, and could not be dismissed as a small ‘royalist procession’. How did the movement suddenly die down in a context where pro-change political parties felt that it could become a headache?

The Prime Minister had called leaders of all political parties in Baluwatar on 8th December and consulted them about the anti-republican movement in the country. In that meeting, the Nepali Congress, People’s Socialist Party (PSP, Jasapa) and other parties had said that the people had taken to the streets due to failure of the government. At the meeting, RPP leaders said that there was no alternative to the restoration of the monarchy and the Hindu nation as the people had already taken to the streets.

The monarchist movement has been slowing down since the Prime Minister held all-party talks. Moreover, after the dissolution of the House of Representatives on December 20, there has been no significant performance or demonstration by the monarchy supporters. Instead, the Prachanda faction of the divided CPN, the Nepali Congress and the PSP (Jasapa) are competing in terms of power demonstration on the streets.

Why did the movement slow down?

The royalists who protested in Kathmandu on 10th October had protested in Butwal on 2nd November, Birgunj on 7th November, Biratnagar on 12th November, Hetauda on 29th November and Chitwan on 5th December. Besides, there were street protests in favor of monarchy in Dhangadhi, Nepalgunj, Dang, Pokhara and other cities.

Although people’s participation in the pro-monarchy movement was strong, no party or organization had its reins. Most of those who took part in the movement said that they took to the streets spontaneously and not for any party or organization. During the agitation, banners of various royalist organizations were seen on the streets. One of them was the National Power Nepal Campaign led by Former Minister Keshar Bahadur Bista.

Campaign Coordinator Bista, on the other hand, denies that the royalist movement has slowed down. “The movement is not slowing down, it is busy preparing for more movements,” he said. Bista said that they are busy in the campaign of organization building and after the completion of the organizational activities, they will start their protests in the first week of March.

Responding to the question “Were the monarchists excited or discouraged by the dissolution of the parliament?”, he said “This system in itself is wrong. The ups and downs within it do not make us excited or discouraged. We are in favor of democracy and Hindu nation with a constitutional monarchy. Without this, we will not be enthusiastic.”

Santosh ‘Rajawadi’, an activist of ‘Bir Gorkhali, desh ra shripech jogaune abhiyan‘, an organization leading the royalist movement, says that they are preparing for a decisive phase of the movement.

Although royalist leaders do not accept this, it is true that the pro-monarchy movement was affected by the dissolution of parliament and its aftermath. According to a campaigner, the royalist movement had to be stopped immediately after the country’s attention was diverted.

“If we had continued the movement, the people would have come, but due to the current situation, it would not be conclusive. Also, the declaration of elections has brought division among the royalists themselves.” he said.

In this regard, Rastriya Prajatantra Party leader Rajendra Lingden also admits that the dissolution of the parliament has affected the movement. He said that the party was engaged in building the organization as the parliament was dissolved, elections were announced and the date of RPP’s General Convention has also been fixed.

“The pro-monarchy movement had widespread public support and will continue to do so in the future,” he told Nepal Press. “We see the need to take it more systematically in the coming days.” With the announcement of the election, we are now focusing on building the organization.

RPP is preparing to hold its General Convention on 7th May. However, Lingden said the convention would be postponed if elections were held in April. He stated that membership distribution and party entry campaign has been intensified after the unification of the party.

“After the formation of the organization, we will become even stronger and resume the struggle,” he said. “If the situation develops accordingly before the General Convention, we can come to the streets.”

RPP did not lead the monarchist movement even though it was the biggest pro-monarchy force. Initially, it only expressed moral support.

After the movement became widespread, RPP got involved. In upcoming days, RPP is thinking of leading the movement on its own. However, other royalist groups also say that RPP’s involvement has weakened the movement.

Has the dissolution of parliament made royalists happy or sad?

Opposition leaders have accused Prime Minister KP Sharma Oli and the CPN-led opposition of undermining the anti-change agenda. The Prime Minister’s repeated attempts to raise issues of religion, from going to the Pashupati temple to offer prayers, to holding a public meeting of the party in front of Narayanhiti Palace have been viewed the same way.

Authorities are trying to persuade the royalist movement to slow down after the dissolution of parliament. He said that the agitated mentality of royalists has also changed after the announcement of elections in the country.

However, the monarchists say they have nothing to do with the dissolution of parliament or a possible restoration.

One royalist said, “Those who are in favor of changing the law are not affected by such developments. It is just a coincidence that the parliament was dissolved and our movement slowed down. It is understood as the silence before the storm. We are now preparing to take to the streets decisively.”