I would have been burnt along with my taxi: Driver Kumbha Narayan 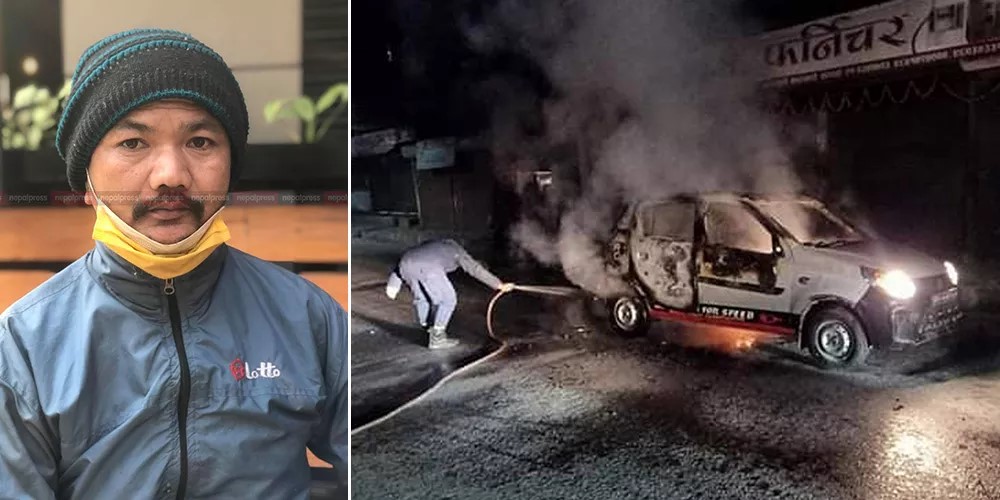 KATHMANDU: On the morning of the general strike called by the Prachanda-Madhav-led CPN, Kumbha Narayan Shrestha took out his taxi (Province 3-01 002J 5881) to make his living for the day. However, his taxi was burnt to ashes, and he had a narrow escape.

Talking to Nepal Press, taxi driver Kumbha Narayan said that two persons set fire to the taxi while he was inside. Had he been a little late to unbuckle his seat belt, he would have turned into ashes along with the taxi, he says.

“This morning at 4 o’clock, I drove my taxi and reached Thapathali. From there, I got a trip to Sorakhutte. As I was about to leave the passenger at Sorakhutte, I got another trip to Samakhusi. After taking him there, another man came and told me to take him to Chabahil. I  thought I got another trip, so I told him to sit down. There were two people.

But their motive was different. They then told me they were protestors.

The one from the right side spilled petrol, the other one opened the door and lit a match. I panicked, and couldn’t think of anything. The car was on fire and I was wearing the seatbelt.

I couldn’t think for a while, but I finally came out and saved myself. Maybe their purpose was to burn me along with the car. If I was a little late, I would also be burned with the taxi.

I am a laborer, the owner did not even know that I had taken out the taxi. When he found out that the taxi was burnt, he scolded me saying I shouldn’t have driven the taxi today. Now, I can’t think of anything. I have no other way to raise my children.

What did those who fought for the country get by burning the taxi of a poor worker like me? How long will the proletariat like us have to suffer for them to gain seats and power?”