The Psychology of Crowds

How do large crowds assemble everywhere? 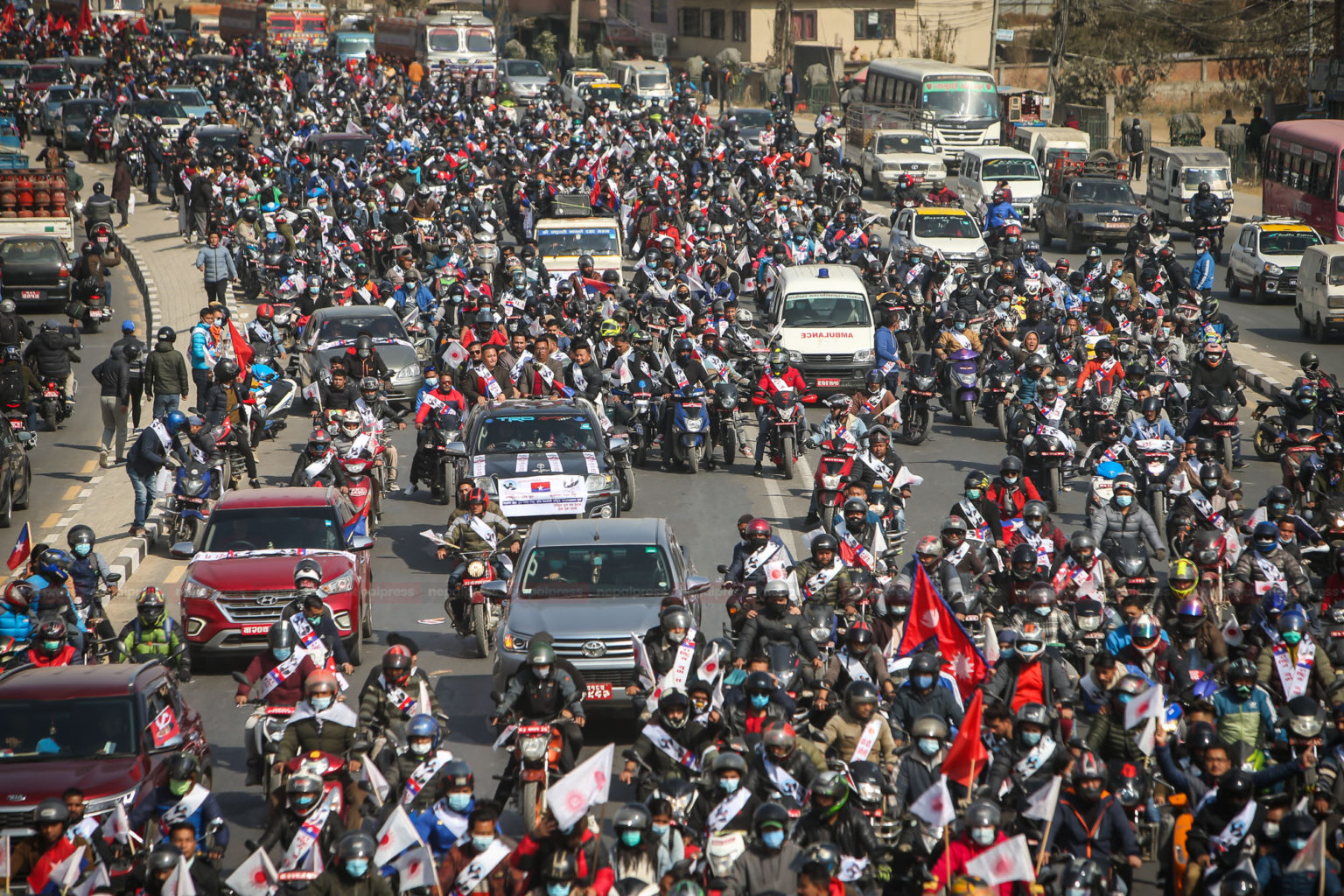 KATHMANDU: It is said that there is extreme disgust among the general public towards political parties and leaders. From local tea shops to social media, this sentiment seems rampant.

Expressions like ‘Leaders are the worst’, ‘Leaders ruined the country’, ‘All leaders should be imprisoned’ are heard coming from many. However, here lies an interesting paradox; thousands of people gather to listen to the speeches of the same political parties and leaders. They huddle and clap at the leaders’ speeches, and then return home only to speak against these very leaders on social media.

Last August, protests started in different cities of the country with the slogan “King, Come and save the country”. As the movement became nationwide, it attracted a lot of citizens. The organizers were proud that people joined the movement enthusiastically. Neutral analysts also reflected that an environment is now being created to restore monarchy in the country. However, that movement seemed to die down.

After the sudden dissolution of the parliament by the Prime Minister KP Sharma Oli, the two divided groups of the Communist Party of Nepal have hit the streets. They are vying for power in Kathmandu and other parts of the country, and the attendance at public meetings organized by both is huge. Both sides have been claiming that many people have attended their public meeting.

Meanwhile, the opposition Nepali Congress is also on the streets. They have been continuing the agitation against the dissolution of the parliament, even though their protests do not seem very strong. Yet. the attendance at their events also does not appear weak.

There were crowds even at the public meeting held by the Biplav group at Bhrikuti Mandap about two years ago. Thousands of people were present at the rally addressed by party spokesperson Khadga Bahadur Bishwakarma. Looking at that crowd, it seemed that the rebel group had also become greatly powerful. 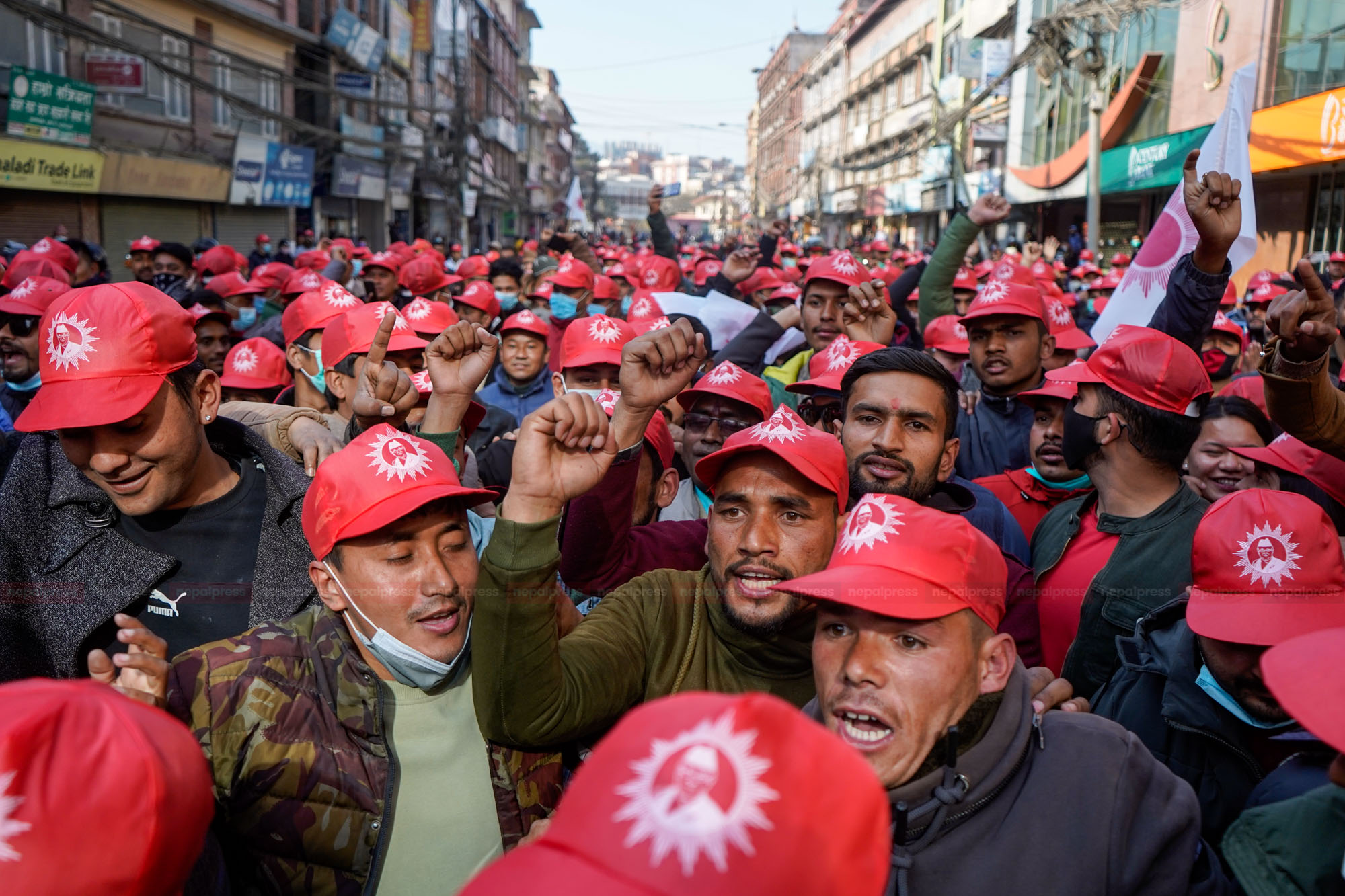 Hence, many are confused as to who the citizens really are in favor of. Why are the people carrying flags of the parties despite holding extreme disgust towards politics of the country?

Let’s find out the reason.

How do crowds assemble?

The associations of big parties are spread all over the country. The CPN and the Nepali Congress have millions of organized cadres. These activists are in the first rows of the crowds gathering at the big events parties organize.

When a party holds a public meeting of great importance, it is widely publicized. There is also a circular released from the center to fraternal organizations and lower committees, with the rule that each committee has to bring in a number of people. After a circular is received from the center, fraternal organizations and committees become active. Then, they call a secondary crowd that is sympathetic to the party. There is also mutual competition between the committees as to who will bring in the most people.

People from neighboring districts are also transported to the meetings organized by the party with utmost importance. Arrangements of a bus to bring people and to provide them with food and water are also made. Even petrol is given to those that come on motorbikes. People are transported to Kathmandu for the meeting to be held the next day, and are also provided with accommodation in hotels for the night.

The segment of the unemployed population in the country is not small. There is no question that people will be ready to go to Kathmandu if they are provided food and accommodation for one night. People from the villages come happily, and thus there is no question on how crowds assemble, which does not hesitate to clap and whistle at the leader’s speech.

Analyst and author Hari Roka says that the number of citizens who really support any party in public meetings is minimal. He argues that there are more people that go as onlookers of the protest activities and less that come through inclination towards the parties themselves.

“People are in the process of understanding. They want to know what is happening and why. They go to the protests to understand,” he says, “And there also are those who can’t say No to their friends who ask to accompany them.”

He said that the gathered crowd does not show the strength of any party. Roka says, “Such demonstrations or rallies do not show how much power the party has. They do not have a big impact.”

He estimates that more such people than party cadres are attending the meetings currently being convened by the ruling party.

Sociologist Dr. Bindu Pokharel claims that people go to meetings or demonstrations for various purposes. She says, “Everyone goes with their own interests and purposes. Going to the meetings doesn’t necessarily mean they are supporters.”

The Prachanda-Madhav faction held a massive public meeting on 29th December against the dissolution of the House of Representatives. Thousands of people from all over the country came to Kathmandu for the rally. Demonstrations were held at various places in Kathmandu. The movement of many vehicles were obstructed.

Maya Dulal, 40, of Kathmandu, who stood at the same procession all day, had no answer as to why she had joined the procession. She did not know of the demands of the movement. “A leader I know invited me. I came since he asked me to,” said Maya.

Not only the Prachanda-Madhav faction, people who do not know the demands of the movement come in large numbers during demonstrations or public meetings of other parties too. Ganesh Shah, Former Minister and member of the standing committee of the CPN-Madhav-Prachanda faction, says that 40 percent people do not really understand the public meeting and demonstration.

Nepali Congress central member Pradip Poudel thinks it is natural to see the presence of a lot of people in the meetings. He said that crowds would be seen at such meetings due to the presence of party cadres. He claimed that not only political activists but ordinary people also have joined the opposition parties’ protest against the government.

“Oli has taken an unconstitutional step. Apart from the members of the Communist Party who oppose this move, other general public also come to the meetings. Hence, it is natural for the crowds to look huge,” says Poudel.

Poudel admits that the new generation is frustrated with politics. “This frustration arose because politics has not been result-oriented. This is true. People have taken to the streets to express their frustration,” says Poudel. He adds, “Some people stay indoors frustrated and some take to the streets against it. People are seen on the streets because of active participation in protests, which too is a matter of despair.”

The competition of the parties to take people to the streets has been going on for years. With the advent of democracy in 2046 BS, competition to mobilize masses began. Especially in the times before elections, the competition is in full swing.

In 2046 BS, the then UML was the largest mobilizer. Madan Bhandari, the party’s General Secretary, was adept at making eloquent speeches. People used to come from far and wide to listen to him. There was no other charismatic speaker as such in the Congress. Top Congress leaders Ganeshman Singh, Krishna Prasad Bhattarai and Girija Prasad Koirala were not very good at this. The Congress party was also not as organized as the UML. Therefore, the Congress was far behind the UML in mobilization of crowds.

There was hope back then that something would happen after the advent of democracy in the country. There was an inclination and sympathy towards democratic leaders who had faced imprisonment along with a lot of other struggles. But gradually, this started fading. After the demise of Madan Bhandari, the UML also became a bourgeois party. There were no leaders in the party who were able to move and instil energy in people just with their speeches.

Recently, Prime Minister KP Sharma Oli’s speech has attracted a lot of attention. His speeches make the crowd laugh. “Oli Baa makes us laugh,” party cadres enthusiastically come to hear him speak. Even Oli’s opponents do not miss his speeches.

Similarly, Congress youth leader Gagan Thapa has also become famous for his speeches. When he speaks, Congress cadres are automatically attracted. Analysts and leaders say that the size of the crowd is based on the level of the party leader who is speaking. They say that crowds will naturally be large in the programs addressed by Prime Minister KP Oli, Prachanda of Madhav-Prachanda group, Madhav Kumar Nepal, Narayan Kazi Shrestha or Jhalanath.

Congress leader Poudel said that the number of participants is based on the presence of leaders in the program. CPN leader Shah has also admitted this. “People don’t just come out in support. They also come to the program to listen to a leader’s speech,” he says.

Writer Narayan Dhakal, who is also a former parliamentarian, says that there is a tendency of parties to take the general public to the general assembly by deception too. He argues that since there is competition among parties to gather crowds, various measures are taken to gather people.

“It is now a trend for parties to bring in supporters and their families. If they want to bring people from the Terai, cadres and party leaders bring them by saying that they will be taken to Pashupatii. After bringing them, they arrange for round trip fare and lunch too. This is the method used to assemble crowds,” says Dhakal.

Dhakal said that the same trend was seen in the activities of different parties.

Some people are even forced to come as they are paid by the parties and cadres. The same tendency is seen in the meetings of the ruling party as well as of the opposition,” he says. According to Dhakal, the number of people attending meetings or demonstrations is much less than it seems. ‘If you look at the meetings of the ruling party, there are very few people who really understand the demands and issues raised. There are a lot of blind party devotees,” he says.