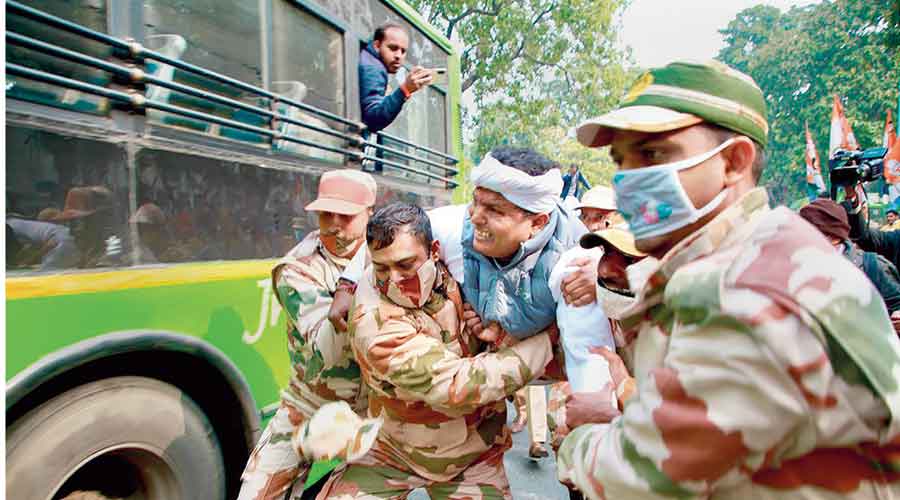 NEW DELHI: Reportedly, A Youth Congress protest against the leak of sensitive national security secrets was foiled by Delhi police as the Opposition party stepped up its campaign against the explosive details in the WhatsApp chat of Republic TV managing director Arnab Goswami with Partho Dasgupta, ex-CEO of TV ratings agency BARC.

The Congress, which has yet to hold a formal news conference on the matter, issued a tweet to dispel any doubts about its stand: “BJP+Arnab — Axis of betrayal. The Maharashtra unit of the party has decided to approach the state home minister Anil Deshmukh to order a separate enquiry into the revelations, as the central government hasn’t indicated its stance so far.”

Deshmukh said in a statement: “We have called a meeting tomorrow (Tuesday) to decide our next course of action. The state government is also gathering information about the leaked chats between Goswami and Dasgupta. Some highly sensitive things, including the Balakot airstrike and the Pulwama attack, have been mentioned in the chats.”

Former chief minister Prithviraj Chavan said: “The voluminous transcript of Goswami’s chats released by Mumbai police is deeply disturbing. Who gave access to such sensitive information, from national security to constitutional amendments and political appointments? The Government of India must launch a thorough probe. Also, the parliamentary standing committee on defence must take this matter with utmost priority.”

The police detained the Youth Congress workers, along with their president B.V. Srinivas, to prevent the march from moving ahead from the party office.

They shouted slogans accusing the government of treason and betrayal and burnt three effigies together — of Prime Minister Narendra Modi, home minister Amit Shah and Goswami.

Srinivas said: “It is a very serious matter. The Prime Minister must tell the nation who was leaking the sensitive information and act against him. The government is protecting Arnab who should have been behind bars. He has run away from Mumbai. Why are the central ministers and BJP leaders not speaking on the subject? The Congress is not going to spare these traitors in this matter.”

The Congress ran a social media campaign, tweeting on several aspects of the chats. It asked: “Can you call an accused who talks of buying the judge a journalist?”

One tweet said: “Nothing is sacred anymore, not the martyrdom of our brave jawans, not even national security secrets — the BJP has sold their soul to win elections. The BJP-Arnab nexus has been exposed & the true anti-nationals are out in the open now.”

The Congress, which has decided to upgrade its attack step by step, has asked former Union ministers of defence and home to examine the issue in detail.