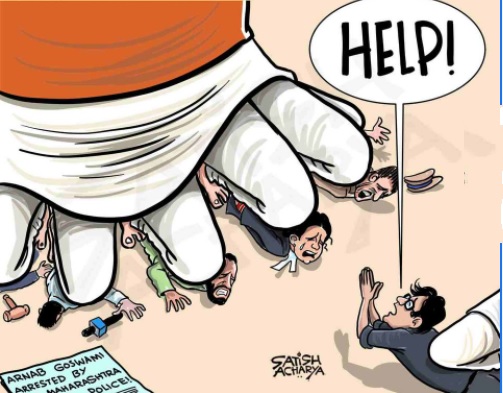 Pakistan has prompted Arnab Goswami’s Republic TV to end a 48-hour silence on its boss but the nation still wants to know who “NM” and “AS” are. The common conclusion is that these words refer to Narendra Modi and Amit Shah.

That the Indian mainstream media aka ‘Godi’ Media works in sync with the BJP government is India’s least well-kept secret.

The opposition Congress party has also questioned Crowswami’s access to classified government information before the attacks. This follows the disclosure of purported WhatsApp messages that suggest Republic TV MD Arnab Goswami may have known about the 2019 air strikes in advance

The purported chats quote Goswami as saying “this attack we have won like crazy”, presumably referring to his channel’s coverage and ratings, less than three hours into the Pulwama massacre in which 40 CRPF jawans died.

Chats suggest that Pulwama massacre made Mr Righteous Indignation of TV whoop ‘this attack we have won like crazy’, and the government smelt a chance to make Indians feel ‘elated’ before the polls.

The chats attributed to Goswami also say three days before the Balakot air strikes that the government would respond in such a way that “people will be elated”.

Goswami had not responded to questions from Indian news media on the authenticity of the chats that became public on Friday and the identity of “NM” and “AS” — two abbreviations that figure in the messages about getting things done.

On Sunday night, Republic Media Network confined itself to lecturing Pakistan and the Congress party in India. “Goswami exposed every sinister design, and evil intention of the Government of Pakistan and the ISI,” it said.

“As the days pass, we will expose this conspiracy…,” the 267-word statement added.  It urged the Congress to stop working in tandem with the Pakistan government, consciously or unconsciously, to spread lies against India’s interests.