The achievement is roughly 50 percent of that planned, but figures are bound to improve. 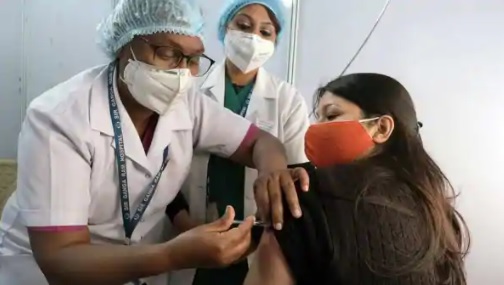 NEW DELHI: As India began its nationwide vaccination drive against the novel coronavirus, 1,91,181 healthcare and frontline workers received the jab on Saturday, the government rolled out the world’s biggest inoculation drive against the pandemic that has caused 1,52,093 deaths and upended millions of lives in the country.

The Health Ministry said that the massive inoculation exercise was done during 3,352 sessions conducted by 16,755 vaccinators, marking it as a historic and biggest coronavirus vaccination drive launched by PM Modi.

Union Health Minister Harsh Vardhan had virtually interacted with the health ministers of all states and Union Territories, congratulating officials for the successful rollout of the Covid-19 vaccine.

Vardhan said the two coronavirus vaccines — Covaxin developed by Hyderabad-based Bharat Biotech and Covishield by the Serum Institute — were a ‘sanjivani’, life infusing, in the fight against the killer virus.

The Indian drug regulator, DCGI, had approved SII’s Covishield and Bharat Biotech’s Covaxin for emergency use on 2 January.

1) Sanitation worker Manish Kumar became the first person in the country to be vaccinated against coronavirus on Saturday. Kumar had received his vaccine shot at New Delhi’s (AIIMS).

3) Apart from healthcare and frontline workers, additional 3,429 beneficiaries were inoculated with Covid-19 vaccine in Defence institutions, including the Indian Army and the Indian Navy.

4) The total number of adverse events following immunisation (AEFI) post-coronavirus vaccine in Delhi stands at 52 out of which only one is severe, according to the Delhi Government.

5) Maharashtra reported 14 cases of adverse events, none of them fatal, on Day 1 of the Covid-19 vaccination drive in the state. More than 14,000 beneficiaries, about 50% of those supposed to be vaccinated on Day 1 had received the shots.

6) As many as 14 cases of AEFI were reported in West Bengal on the first day of the nationwide coronavirus vaccination drive. “Total 15,707 healthcare beneficiaries vaccinated in the state today. 14 cases of AEFI were reported including one serious case (condition stable) of AEFI admitted at NRS Medical College,” the West Bengal Health Department has said.

7) Soon after the first vaccination drive against Covid-19 began in Telangana, 11 mild AEFI cases were reported in the state. The beneficiaries felt pain, giddiness and sweating, which are the most common in any vaccination programme.

8) Out of 12,558 people who received the first shot of Covid-19 vaccination in Rajasthan on day one, there were 21 cases of AEFI in nine districts of the state.

9) Bharat Biotech, whose Covid-19 vaccine Covaxin has been cleared for emergency use while still in the clinical trial, has said that it will pay compensation to any beneficiary who will face serious adverse after-effects post-vaccination.

10) India plans to inoculate nearly 30 crore people with two doses of its Covid-19 vaccines in the first six to eight months of 2021. Frontline workers will be followed by around 27 crore people older than 50 or deemed high-risk because of pre-existing medical conditions.

AIIMS authorities said that a security guard who was given the vaccine at the hospital developed an allergic reaction. “He is kept under observation of doctors at the hospital.”

The “minor” AEFI cases were reported from all districts except the north-east and Shahdara districts, officials said.

Administration of coronavirus vaccine started in Delhi at 81 centres across the city on Saturday. Each Centre was targeted to administer vaccines to 100 people (health workers).

Against a target of 8,117 health workers to be vaccinated on the first day of the drive in 11 districts of Delhi, a total of 4,319 were administered the vaccine, figures showed.

Northwest and west Delhi districts had the highest target of 1,100 vaccinations each where 706 and 487 people, respectively, were vaccinated.

In northeast Delhi, there were two vaccination centres and a total of 77 people were vaccinated against the target of 200 people, official figures showed.

According to World Health Organisation (WHO), any untoward medical occurrence which follows immunisation and does not necessarily have a causal relationship with the usage of the vaccine is known as AEFI.

With inputs from agencies.