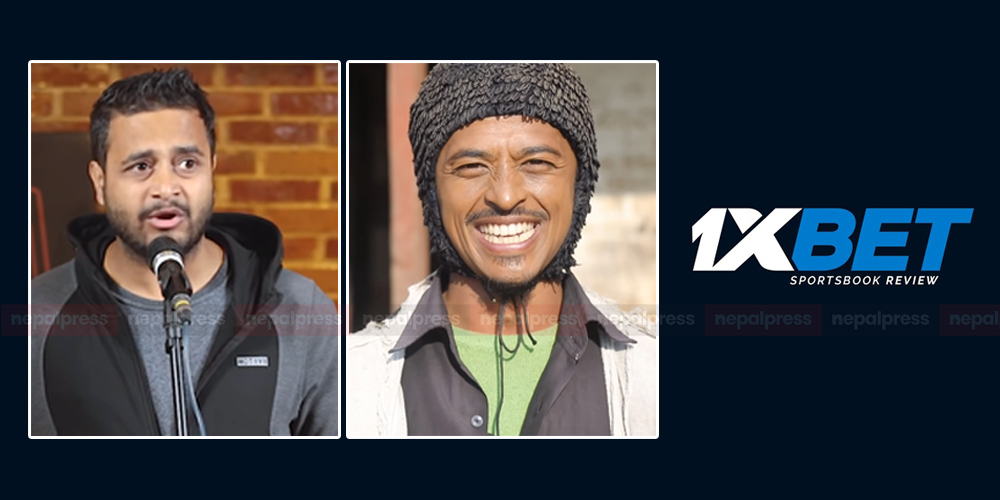 1XBet Company, which is running an illegal Hundi and betting business, has been found to be promoting Nepali celebrities and famous content creators by deceiving them. Lately, the company which actively targeted youth channels YouTube is also gradually attracting bigger artists. The company, which initially advertised through YouTubers and Tiktokers like Jalan, Ming Serap, is now using Marichman Shrestha (Balchhi Dhurve) as a medium for promotion.

The 61st episode of the comedy TV series ‘Halka Ramailo‘, which was made public on Marichman’s official YouTube channel only on Sunday night, has a 20-second long advertisement. The video, which was uploaded from a channel with more than 1 million subscribers, has been viewed more than 400,000 times.

However, does Marichman know about the legitimacy of this ad? No. “I didn’t know it was an advertisement for an illegal act,” Marichman told Nepal Press.

Celebrities are ideal personalities of society. Their smallest deeds have great impact.

However, 1XBet is misleading celebrities too, without the government’s notice. From this, it is easy to estimate the extent to which Nepali youth are unemployed and how Nepalese of low intellect are falling prey to this illegal trade.

Som Dhital, the production consultant of the video, which was uploaded from Balchhi Dhurve‘s channel on Sunday evening, admitted that it was wrong to advertise illegal work.

“Only the production is mine. Broadcasting is done by Balchhi (Marichman) from his personal YouTube channel,” he said. “However, I am not trying to dodge the fact that we made a mistake. Since the name of my company Media Hub is there, it was our fault and we accept it.”

All citizens should be aware of the laws and regulations of the country. Legal and illegal acts should be audited. However, celebrities and content creators who have been enjoying the illicit income of 1XBet seem to have completely neglected the law.

Some YouTubers had removed the promotion after Nepal Press revealed illegal Hundi and betting of 1XBet, and the company has also removed the payment platforms from its website. Even so, some YouTubers have not stopped promoting it openly. The video titled ‘Vivhaahit Purush – 2′ uploaded on January 7 from the YouTube channel “Nep Gasm” has an advertisement of 1 minute and 3 seconds long. As soon as he found out, “Nep Gasm” did not even notice when he sent a message to the WhatsApp number given in the ‘description’ of the same video.

After all the news related to this was sent to them, they responded ‘Thank you for the important advice’, but the promotion has not been removed from the video. Nor has there been a reply to messages since then.

Similarly, Marichman Shrestha also admitted that he had advertised 1XBet through video as he was given good money. “I was given the money in advance from my pocket,” he said. “If I had known it was illegal, I would not have done such a thing.”

1XBet reacted in many ways after the illegal business of 1XBet was exposed in Nepal Press. It removed payment platforms from its system and Youtubers removed the advertisements, but started promotion through other channels.

1XBet has removed Nepali payment platform from the system. Earlier, payment platforms including Khalti, IME Pay, NIC Asia Bank and Connect IPS were available for deposit and withdrawal. Now, those services have been removed. However, on the one hand, despite the signs of closing down the business, the advertisement being done through new mediums shows how dramatized the reaction of 1XBet is.

Investigation underway, action will be taken: Ministry of Communications

The matter is being monitored by the Department of Information and Broadcasting and a technical team is working on it, according to Dilliram Sharma, Chairman of the Advertising Board and Spokesperson of the Ministry of Communications and Information Technology. He informed that the technical team of the Advertising Board formed to monitor, regulate and implement the overall advertising market is monitoring the situation.

“We have issued a notice, which is already being implemented,” he said. “Everyone must follow the law. Those that don’t will be taken action against.” He also informed that the issue has been discussed in the Advertising Board, Department and Ministry and monitoring is underway.

Spokesperson Sharma said that if anyone commits such an act outside the law even if he did it without knowing it, action should still be taken against them.

“If you have made a mistake, you will not be spared in the law,” he said. “You have to know the law and legal provisions. You don’t get exempted just because you don’t know.”