India gears up for vaccination

India embarks on the world’s largest vaccination drive this weekend

The world awaits with bated breaths 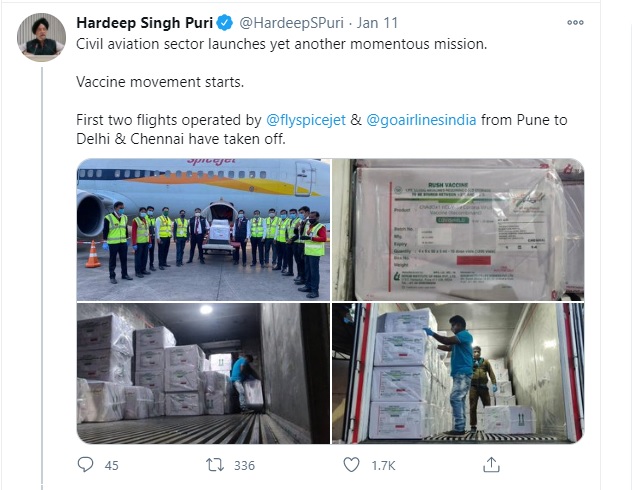 NEW DELHI: India is gearing up for one of the largest mass vaccination exercises in the world starting Saturday.

The South Asian country plans to inoculate some 300 million people, or more than 20% of its 1.3 billion population, against Covid-19 in the first phase of the exercise.

Priority for the shots will be given to health-care and other frontline workers — an estimated 30 million people. That would be followed by those above 50 years of age and other younger, high-risk individuals.

The rollout will involve close collaboration between the central government and states.

India has also developed a digital portal called Co-WIN Vaccine Delivery Management System. It will provide real-time information on “vaccine stocks, their storage temperature and individualized tracking of beneficiaries,” according to the health ministry.

India has a long history of immunization campaigns … and will rely on this expertise to distribute coronavirus vaccines.

“India’s expertise in vaccine manufacturing and experience with mass immunization campaigns has prepared it well for ‘phase 1’ vaccinations set to begin this weekend,” Akhil Bery, South Asia analyst at Eurasia Group, wrote in a report this week.

“India has a long history of immunization campaigns, including its Universal Immunization Program that inoculates 55 million a year, and will rely on this expertise to distribute coronavirus vaccines,” he added.

India’s drug regulator has approved the restricted use of two coronavirus vaccines in emergency situations, both of which are being delivered to the various inoculation centers ahead of Saturday.

One of them is a vaccine developed by British-Swedish firm AstraZeneca and Oxford University, which is being manufactured domestically by the Serum Institute of India (SII) and is known locally as Covishield.

Another vaccine, called Covaxin, was developed domestically by India’s Bharat Biotech in collaboration with the state-run Indian Council of Medical Research. It was granted emergency use authorization as clinical trials continue.

The approval of Covaxin was reportedly criticized by some as the regulator gave the green light shortly after asking Bharat Biotech for more analysis.

India’s health secretary on Tuesday said the Indian government has signed procurement agreements for 11 million doses of Covishield at 200 Indian rupees ($2.74) per dose and 5.5 million doses of Covaxin at an average cost of 206 rupees per shot, which is likely to be cheaper than what they will cost in the private market.

Several other candidates, including a second domestically developed vaccine by Zydus Cadila, are undergoing clinical trials.

India currently has more than 10.5 million reported coronavirus cases, second only to the United States. More than 151,000 people have died from Covid-19 in India, according to Johns Hopkins University data. But daily reported figures show the number of active infections are declining.

South Asia’s largest country is also the world’s biggest vaccine manufacturer and is said to produce about 60% of all vaccines sold globally.

As such, India’s production of Covid vaccines is expected to play a major role in global immunization drives against the disease.