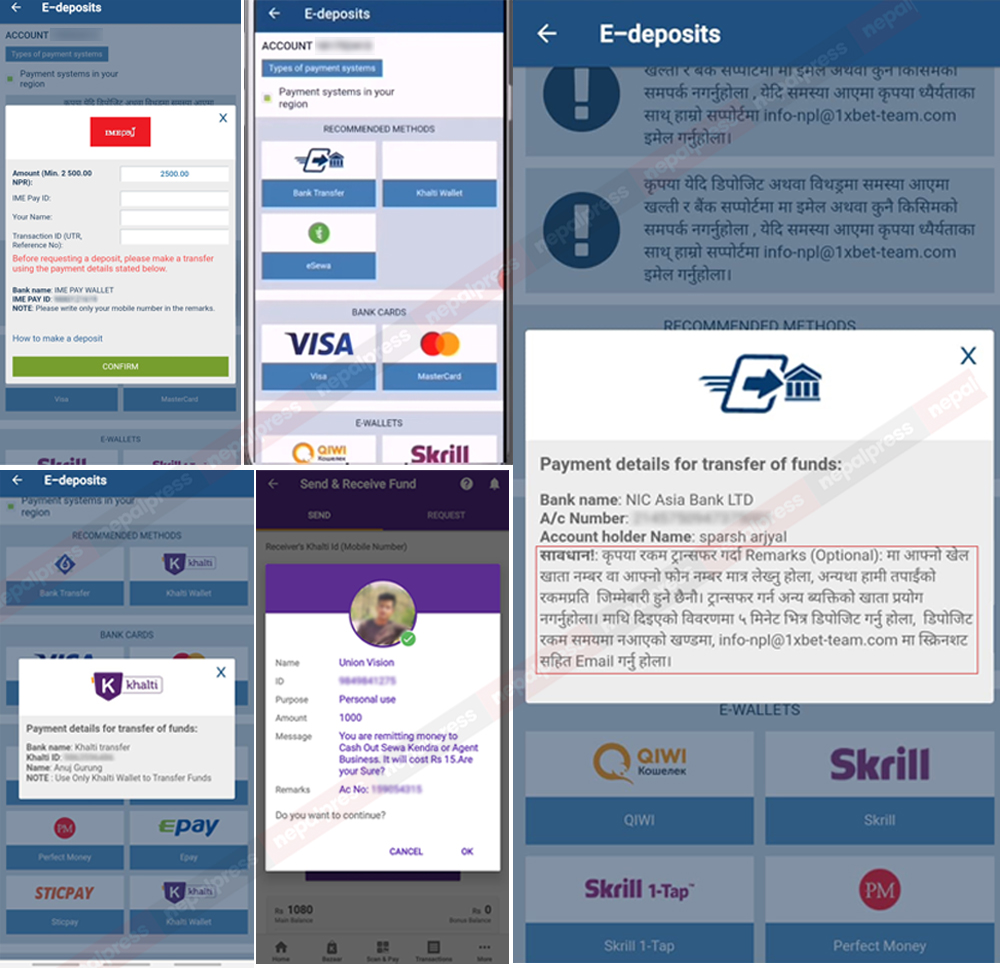 KATHMANDU: It has been found that the company ‘1XBet’ that trades on betting, which is prohibited by the law of Nepal, is taking millions of rupees daily by trading ‘Hundi’ from Nepal. According to sources, 1XBet has been found to be trading through its agents.

The agreement between OneX Bet Company and its agents provided to the Nepal Press by a source states that “the first party (agent) will have to send money through Hundi, Bitcoin, Neteller, Skrill or Perfect money when sending prepayment.” 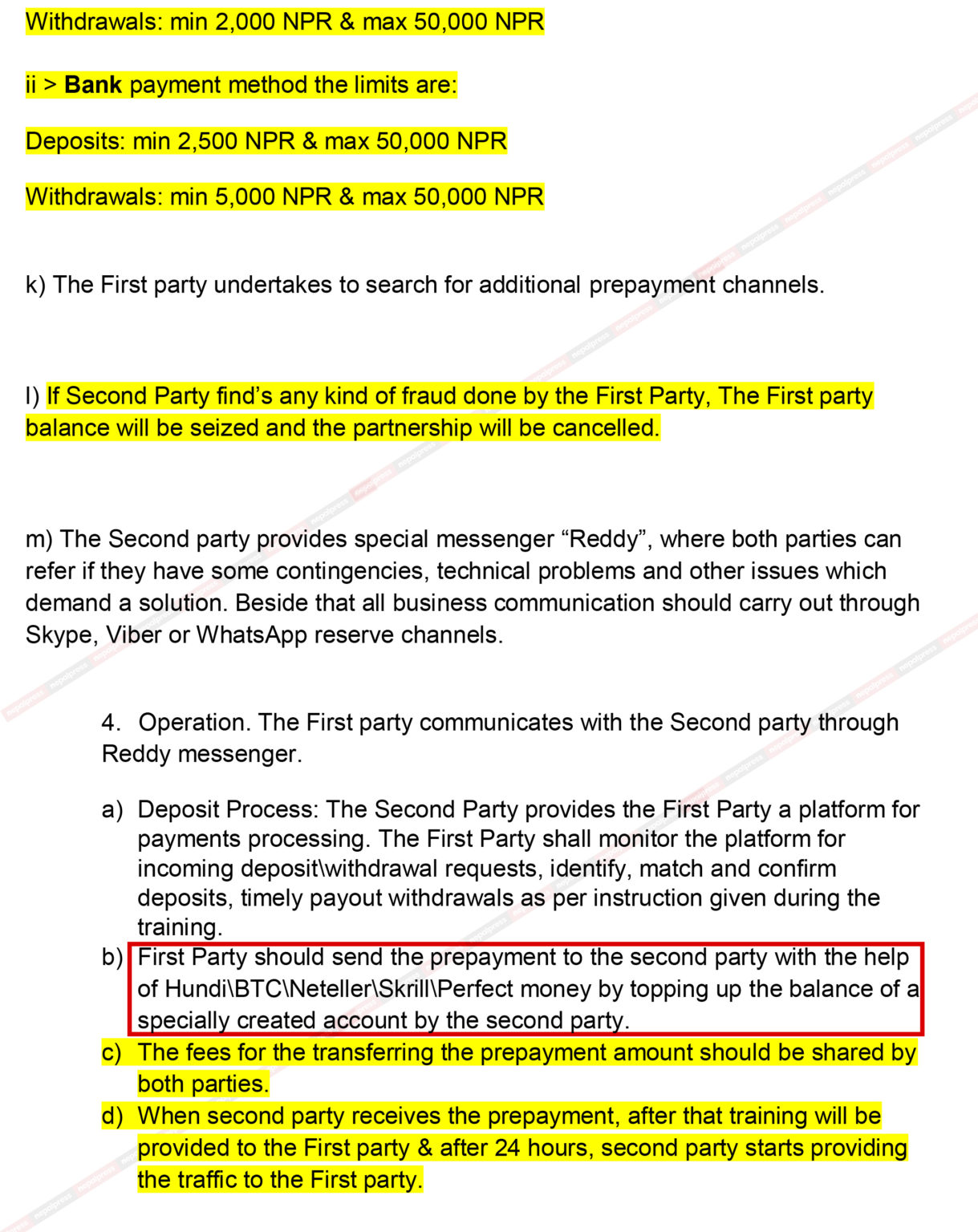 The above agreement, which is not in any letter pad or official letter of the company, shows how openly Hundi is being traded.

Currently, the betting network is being expanded targeting Nepali youth. As betting and online transactions are not easy in Nepal, it has been found that 1XBet is using Nepali youth as its agents.

According to sources, there are currently around 50 to 100 agents working for 1XBet in Nepal. “There are between 50 and 100 agents in Nepal who go to 1XBet’s website and mobile application to help others play online games and ‘deposit’ and ‘withdraw’ money for betting,” the source told Nepal Press.

Even if an account can easily be created on 1XBet, it is difficult to deposit and withdraw money. Thus, money is transacted using platforms like Khalti, IME Pay. After you process to deposit money from your digital wallet to the gaming account, a name and account number show up. All such names are of Nepali agents.

Sources have informed that the agents of 1XBet will even invest some money initially. “If a Nepali is willing to work as an agent in Nepal, the company will enter into an agreement with him,” the source said.

By making such an agreement, it has been found that 1XBet is making deposits and withdrawals from Nepali payment platforms through Nepalis who have become agents by investing some money. People involved say, “For example, if I’m an agent, my Khalti ID and name are used by the company. My name and ID shows up when the bettor processes the money for the deposit, which is similar to ‘One Time Password’ (OTP). The money should be deposited in the account within five minutes. If someone deposits the money in the agent’s account this way, the money transfers to the bettor’s gaming account in a few minutes.

This way, Nepali agents have been getting a certain percentage of commission for 1XBet’s use of Nepali payment platforms. Likewise, promoters and affiliates receive a certain amount of money for their ‘client’. “Jalan asks his viewers to register by putting his promo code in the promotion. If someone registers with such promo code, Jalan will get 27 percent of the money lost by that client for the rest of his life,” the source said.

The 1XBet Company, headquartered in Cyprus, has opened a Nepali department for Nepal and hired Nepali workers, according to sources. “The search for an agent starts with the customer care of the Nepali department. Looking at the contact details of the users registered for betting from Nepal, the person who can be easily ‘convinced’ is selected, and the customer care sends them an offer via email.” 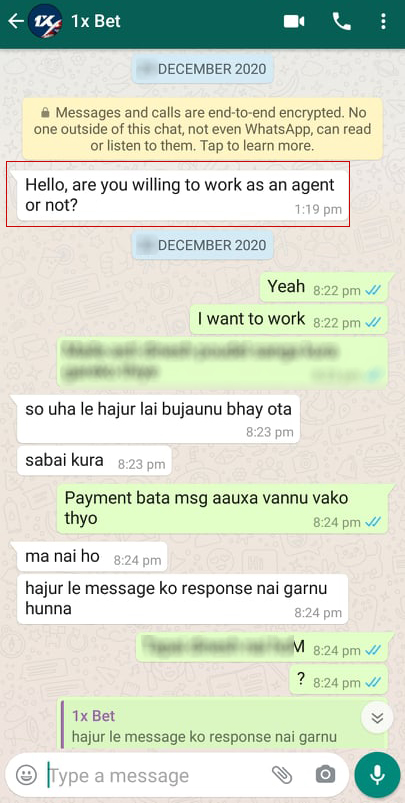 According to the people in the network, they were asked in the email if they want to make money by becoming an agent of 1XBet company. If someone responds to such an email saying ‘I want to be an agent’, they will receive a message on WhatsApp or Viber. And, after completing the rest of the process, signing the agreement, participating in a few days of training, and sending prepayment to the company, i.e. after buying the ‘tariff’, one becomes the agent of 1XBet. 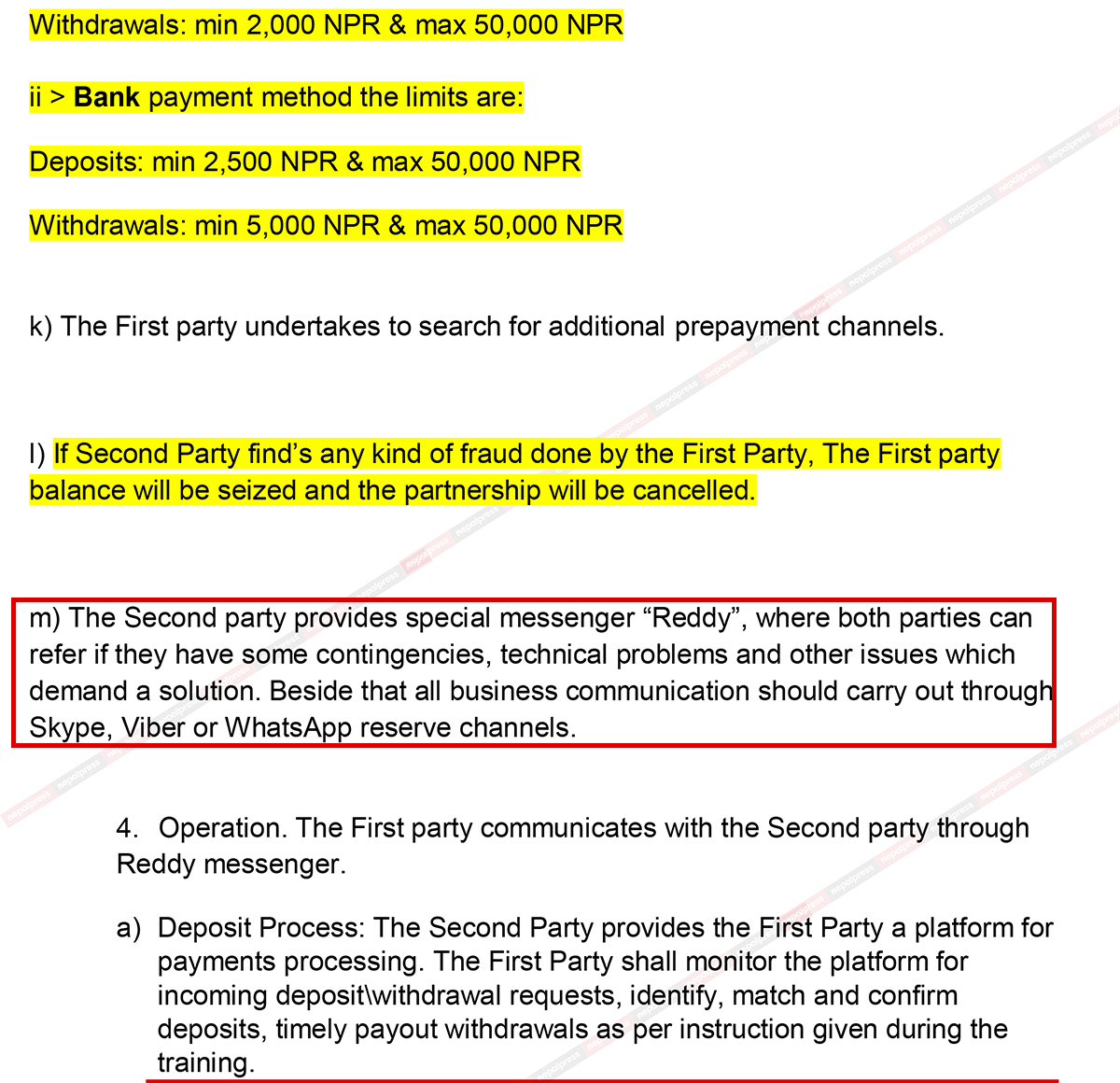 1XBet has been found to be using an app called ‘Reddy’ for instant messaging with its agents. In the agreement made available to Nepal Press, it is mentioned that the agent will get the Reddy app on behalf of the company and can talk about emergency communication, technical problems, and solutions. Apart from that, all other business matters should be done through Skype, WhatsApp and Viber.

Buying a tariff means that the agent has to deposit some money at the beginning. “In the case of Nepal, the tariff package starts from a minimum of NRs 300,000. After purchasing the tariff in this way, the agent can transact the same amount of money. Simply put, it is like Hundi.”

The agent pays 1XBet and takes the money from the bettor. According to sources, one person cannot be the only agent because money deposit and withdrawal requests can come at any time, so it should be available 24 hours a day seven days a week. Therefore, there should be at least three members in the agent’s group so that three people can work 8/8 hours.

Digital wallets such as e-Sewa, Khalti, IME Pay have become the main business medium of 1XBet. However, sources said that these were being used as a “third party service” without their knowledge.

“Even if their service is being used, 1XBet does not disclose the account. If an agent’s account is suspected, the account will be blocked. The agents will keep changing their accounts in order to continue trading or betting so that there are fewer chances of tracking from banks. This is going on smoothly in a very clever and illegal way.”

If any problems arise while transacting in this way, the company has repeatedly sent notifications to not call the bank or digital wallet. According to the people involved in such illegal betting, at least 1 to 1.5 million rupees are being sent abroad from Nepal daily in the form of Hundi.