‘Nepal is ready to mediate between India and China’ : PM Oli 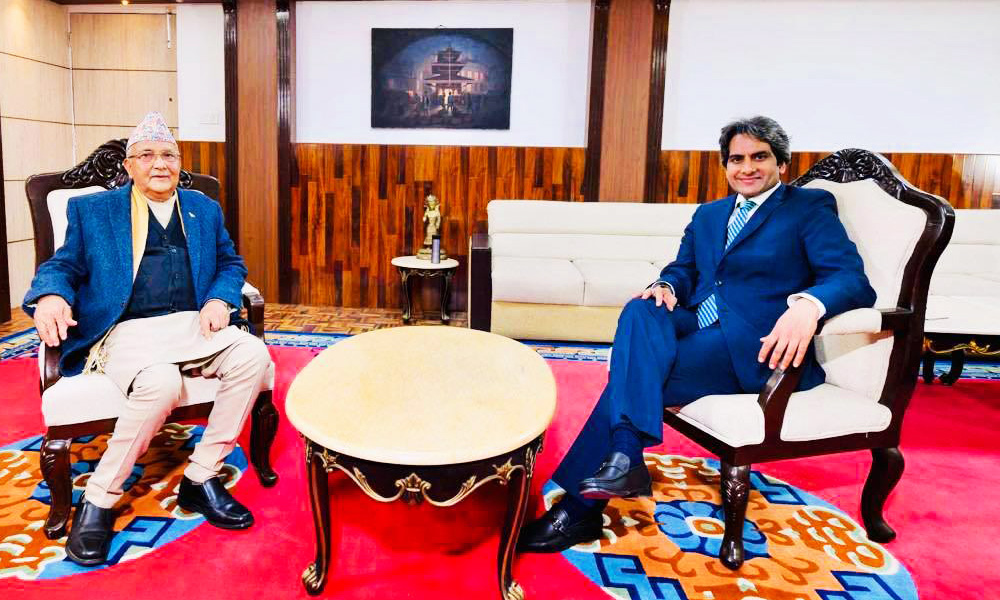 KATHMANDU: Prime Minister KP Sharma Oli has said that Nepal is ready to mediate the relations between India and China if necessary. In an interview with Indian television channel Zee News, he said Nepal could play the role of a diplomatic “mediator” between Chinese President Xi Jinping and Indian Prime Minister Narendra Modi.

“They are both my friends. The three of us started politics at about the same age. We can understand each other,” Oli said. “Nepal practices the politics of neutrality. We don’t play cards against each other. We want to have an equal relationship. No good comes from playing cards.”

Oli also said that Nepal would not allow one neighbor to use its land against another. Oli refuted Indian criticism that Nepal has a soft corner for China. “Nepal is not soft on China. We want a problem-free relationship with our neighbors.”

Stating that a brotherly relationship where superiority is present does not exist between Nepal and India, Oli said that it was important to establish mutual relations in the changing times. “This is an era of mutual respect. This is not the age of colonization. In terms of geography and size, the size of the country may be big or small, but as a nation, India and Nepal are the same,” Oli added, “If India is sincere, it will not consider itself a boss. Modiji is a few years older than me personally, but we have the same status as the head of government. ‘

Asked by Zee News Editor-In-Chief Sudhir Chaudhary whether Nepal is stuck between India and China, Oli said, “Both are our good neighbors. You can’t change your neighbor even if you want to. Both are large in size and development. This is a matter of happiness for us. We want to have an equal relationship between the two countries. We are ready to remove the misunderstanding between the two countries.”

Stating that the coming era belongs to Asia, Oli said that science and technology have been used against India and China in the past. ‘India stretches from the Himalayas to the Indian Ocean, why did it remain poor? China stretched from Chomolong to Mongolia, why did it remain poor? Nepal was never colonized, but it also remained poor, because science and technology were used against Asia,” Oli said. “Asia, and more specifically Nepal, is a land of knowledge, penance, and invention. Before Newton discovered gravity, Bhaskaracharya had already discovered it and Gayatri Mantra was written by Vyas sitting on the bank of Koshi.”

Prime Minister Oli said that India should respect the history, facts, and sentiments of the new map published by Nepal including Limpiyadhura and Kalapani. Oli also said that Nepal would not compromise with both China or India over its sovereign geography. Rejecting criticisms that India would speak on the border issue while China remained silent, Oli said that both the countries would be given equal treatment. He repeatedly stressed the existence of mutual and cordial relations between the two countries.

Asked if he would remain the Prime Minister even after the April (Baisakh) elections, Oli claimed that his party would bring in majority votes and stay in office. Even if there are some weaknesses in conducting the election, our party is large. We will have to represent the government even after the election,” said Oli.