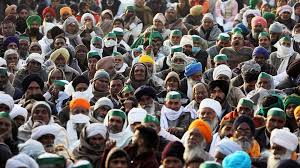 Indian Farmers’ Protest Updates: Hearing a clutch of petitions challenging the new farm laws as well as the ones related to the ongoing agitation at Delhi borders, India’s Supreme Court said it was disappointed with the way negotiations between the government and the farmers have progressed and said it will pass an order on the matter today or tomorrow.

The apex court asked the Centre to stay the laws till a committee constituted by it discusses the same and submits a report. “Let those farmer unions who say it is progressive say that before the committee. But you have to tell us whether you stay the farm acts or we do it. Keep it in abeyance. What is the issue?? We are not in favour of easily staying a law but we want to say don’t implement the law,” the top court said.

The bench comprising of CJI Bobde Bobde and Justices A S Bopanna and V Ramasubramanian further said, “Some people have committed suicide, old people and women are a part of the agitation. What is happening?”  The bench added that not a single plea has been filed that said that the “farm laws are good.”

Talks between the Centre and farmer unions on the new agriculture laws failed to make any headway even after the eighth round of talks. The Centre and the farmer leaders are scheduled to hold their next meeting on January 15.

During the last hearing, the top court, which had observed that there is no improvement on the ground regarding farmers’ protests, was told by the Centre that “healthy discussions” were going on between the government and the unions over all the issues and there was a good chance that both sides may come to a conclusion in the near future.

While hearing the pleas on the issue of farmers’ protest, the top court had on December 17 said that the agitation should be allowed to continue “without impediment” and this court will not “interfere” with it as the right to protest is a fundamental right.