Indian farmers agitation: Another Round of talks fail 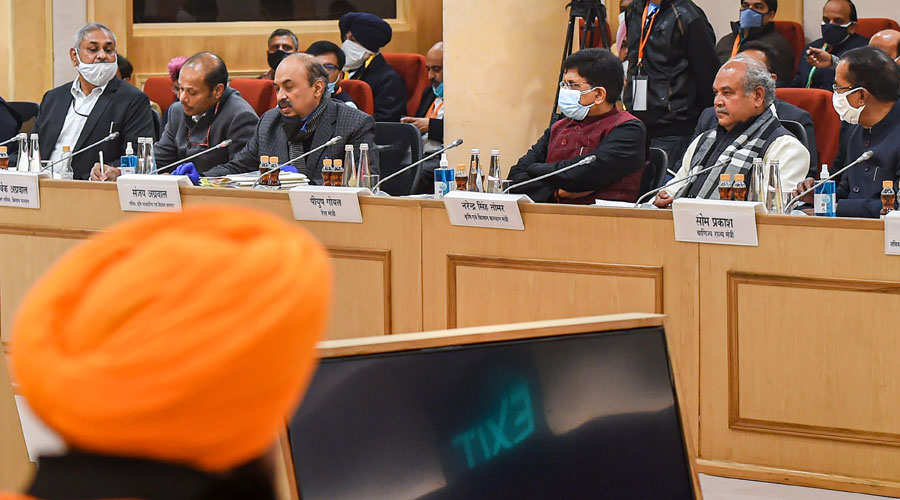 NEW DELHI: The Indian government on Friday ruled out repealing the three new farm laws and asked the farmer unions to go to court during their eighth meeting to break the deadlock, resulting in a near breakdown of the conversation.

Still, the farmer unions have for now agreed to participate in the next meeting, scheduled for next Friday after a Supreme Court hearing of a batch of petitions relating to the dispute.

The farmer union leaders made it clear they would not give up their fight even in the face of an adverse Supreme Court order, as none of the organisations that are part of the Sanyukta Kisan Morcha (SKM) have sought court intervention.

“The unions are clearly saying that whatever the courts might order, they are not going to budge until they have secured repeal of the laws and the discussion on MSP (minimum support price) has moved further,” said Kavitha Kuruganti of the Mahila Kisan Adhikar Manch.

“They have already set a deadline of January 26, after which they will start marching into Delhi.”

She described it as a “sad day for democracy when an elected government in the middle of talks takes resort in the Supreme Court and says that we should fall back on the court”.

Compared with the earlier meetings, Friday’s talks were wrapped up quickly. Earlier, a heated argument had broken out when the union leaders told ministers Narendra Singh Tomar and Piyush Goyal that it was clear the government was uninterested in addressing the farmers’ concerns and was deliberately stalling proceedings.

Kept waiting yet again for half an hour by the ministers, who have routinely arrived 30 minutes late for these meetings, the farmer leaders refused to break for lunch or tea.

They went into silent mode for a while and one of them held up a banner in Punjabi articulating their resolve to fight to the finish. “Ya marenge, ya jitenge (We shall die or win),” it said.

Followers of the Bharatiya Kisan Union (Tikait) have coined the slogan: “Bill wapsi toh ghar wapsi (Repeal the laws and we return home).”

Tomar said there was support for the new farm laws and the government had to keep that in mind, too, instead of going along with what one segment of farmers was saying.

The union leaders challenged his assertion, arguing that most of the organisations the government was trotting out as farmer outfits had little support within the farming community.

Veteran farmer leader Balbir Singh Rajewal underlined that the government had no constitutional right to legislate on agricultural marketing since it was a state subject, but added caustically that rulers can do whatever they like. “But we will continue sitting…,” he said.

Punjab Kisan Union president Ruldu Singh Mansa is understood to have been drawn into a heated argument and said: “We come from the land of the Gurus with a tradition of sacrificing everything for what we believe in. Do not expect us to buckle.”

BKU (Tikait) leader Rakesh Tikait told reporters after the meeting: “The farmers will not relent till the laws are repealed. We will come again on January 15. We are not going anywhere.”

Asked why the farmers were not seeking court intervention, Hannan Mollah of the All India Kisan Sabha said the option had been considered and rejected seven months ago when the ordinances were promulgated.

“Why should we go to court over a decision of the executive? This is a conversation that farmers — who constitute 60 per cent of the population — want to have with their elected government,” he said.

“It is the government’s duty to save the farmers from what is certain death if these laws are enacted. If you will save us, we will survive; else we will die.”