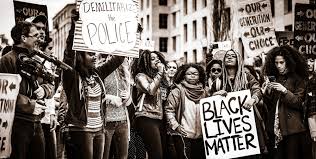 “No one can tell me that if it had been a group of Black Lives Matter protesting yesterday… they wouldn’t have been treated very, very differently than the mob of thugs that stormed the Capitol,” President-Elect Joe Biden after the unforeseen attack on the Capitol.

“We all know that’s true, and it is unacceptable.”

So reportedly, Helm was startled and frustrated Wednesday to see a White, pro-Trump mob storm the U.S. Capitol — breaking down barricades, smashing windows and striking police officers — without obvious consequence. This has cemented their belief that the law is unequal when it deals with white mobs as compared to peaceful black protesters. What is the most frustrating corollary is that if the capitol is not safe in the US, what else is? The extent of collusion and collaboration possible from racist white actors in any future act of violence is clearly foreseeable.

“Our activists are still to this day met with hyper-police violence,” Helm is quoted as saying. “And today you see this full-on riot — literally a coup — with people toting guns, which the police knew was coming and they just let it happen. I don’t understand where the ‘law and order’ is. This is what white supremacy looks like.”

Helm and other activists across the country who spent much of 2020 facing off with law enforcement officers while protesting police brutality and racial inequality watched with a mixture of outrage and validation as the president’s supporters stormed the Capitol building during sessions of the House and Senate.