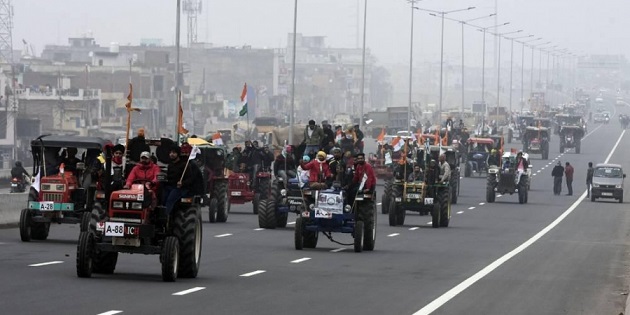 NEW DELHI: Armed with Google maps and contact details of navigators, thousands of farmers in tractor-trolleys descended on the Eastern and Western Peripheral Expressways on the outskirts of New Delhi on Thursday. This came as a dress rehearsal of ‘tractor parade’ planned on India’s Republic Day.

At least 5,000 tractors with over 10,000 farmers took part in the rally on the arc-shaped Kundli-Ghaziabad-Palwal (Eastern) and Kundli-Manesar-Palwal (Western) expressways. The show of strength came a day before the Modi government and the farmers’ unions sit for eighth round of talks.

The rally was taken out from four different points — Singhu to Tikri border, Tikri to Kundli, Ghazipur to Palwal and Rewasan to Palwal. The farmers camping at Singhu and Tikri borders entered the expressway from Kundli and Sampla, respectively. Both the groups met midway before returning to their bases. The farmers protesting at Ghazipur border met the group from Rewasan in Palwal, Haryana, and returned to their camps.

Interestingly, the rally on KMP Expressway was joined by a large number of farmers and youngsters from Haryana. Both at Singhu and Tikri borders, it’s the farmers from Punjab who are leading the stir.

Farmers and youngsters were also seen in cars and jeeps. At the KMP crossing, the volunteers continuously made announcements and alerted the farmers to drive in a lane.

“The rally was peaceful and was even more successful than expected. We had expected only 500-600 tractors from Haryana but 2,500 came. The farmers from near Delhi joined the rally,” said Paramjeet Singh Katyal of Samyukta Kisan Morcha.

the government and the farmer unions stuck to their respective positions on Thursday — the agitating farmers took out tractor rallies to press their demand for rollback of new agri laws and the Centre asserted it is ready to consider any proposal other than their repeal.

As both sides looked for a resolution to the over one-month-long deadlock, rumours about some states being allowed to opt out of the central laws started doing the rounds, but the agitating unions said they had not received any such proposal from the government.

Union Agriculture Minister Narendra Singh Tomar too answered negatively when he was asked by reporters if there was any proposal to give state governments the freedom to implement the new laws.

Tomar, along with Food Minister Piyush Goyal and Minister of State for Commerce Som Parkash, has been spearheading the government’s negotiations with 40 protesting farmer union leaders.

The latest round of talks to be held at Vigyan Bhavan at 2PM on Friday is crucial as the previous meeting on January 4 remained inconclusive with both sides sticking to their positions.

There was some breakthrough in the sixth round of talks on December 30 when the government conceded to two demands of the agitating farmers pertaining to power subsidy and stubble burning.

The previous rounds of talks had failed to make any headway.

Farmer leader Shiv Kumar Kakka, a senior member of the Samkyukt Kisan Morch, said that unions have not received any proposal for allowing some states to opt out and asserted that they will reject the same if it is sent to them.

The Samkyukt Kisan Morch is an umbrella body of around 40 farmer unions protesting at several Delhi border points for the last 43 days against the new agri laws. Bhartiya Kisan Union (Ekta Ugrahan) chief Joginder Singh Ugrahan, who is also a senior member of the Morcha, denied receiving any proposal from the government.