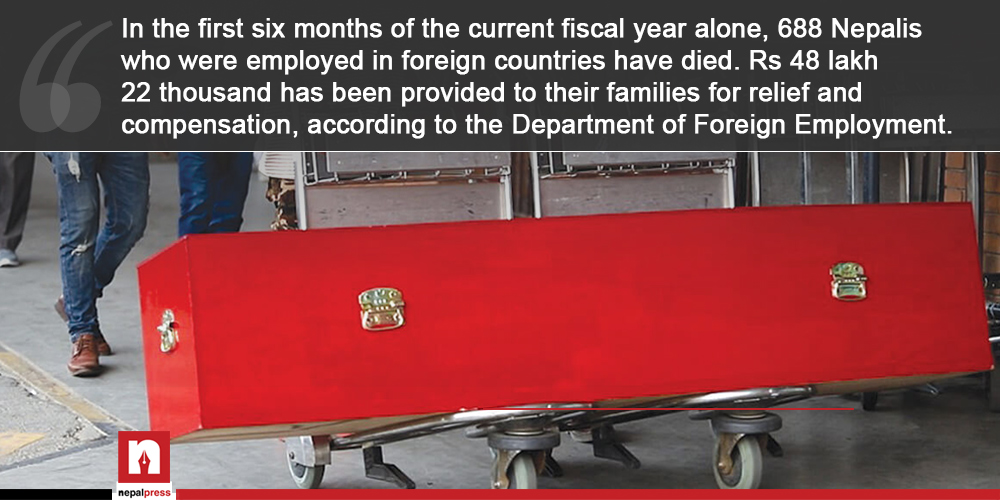 In the first six months of the current fiscal year alone, 688 Nepalis who were employed in foreign countries have died. Rs 4.8 Million has been provided to their families for relief and compensation, according to the Department of Foreign Employment.

During the same period, Rs 86 million was spent on managing 359 bodies of those that died in foreign employment, the department said.

More than 25,000 people have emigrated during the COVID-19 pandemic. According to the Department of Foreign Employment, 25,754 people have re-applied for labour permits from Shrawan 1 to Poush 16 of the current fiscal year.

The Ministry of Labor, Employment and Social Security has stated that 1.75 lakh Nepalese have returned home in a period of six months, citing the COVID-19 Crisis Management Centre (CCMC). Although 142,807 people applied during the period, the number of Nepalese that returned home increased by 14,309 and became 157,116 according to the Ministry.

The Ministry has claimed that out of 6,896 complaints received at the Call Center run by the Ministry with the help of the Foreign Employment Board Secretariat, about 94 per cent or 6,420 complaints and grievances have been addressed.

Of the 94 complaints lodged with the Department of Foreign Employment in the last six months, 21 have been dismissed and two have been fined, according to the department.

The Department also informed that Rs. 4 Million worth fines have been paid in 26 cases registered with the Foreign Employment Tribunal.

During the last six months, 743,081 people at all 753 local levels have registered themselves as unemployed. Of them, 1,279 have found employment through the Prime Minister’s Employment Program, according to the Ministry of Labor, Employment and Social Security.

Out of 507 complaints related to labour, 249 have been resolved and 308 are in the process, said the Department. Five people have been killed and four others injured in 11 industrial accidents in the last six months. Three of the injured are undergoing treatment.