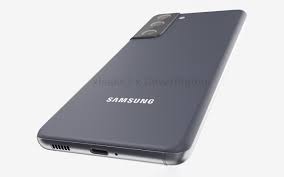 Samsung chose to launch the phone at the tail end of next week’s CES conference.

Samsung will likely have three different flagship phone models: the 6.2-inch S21, the 6.7-inch S21 Plus and the 6.8-inch S21 Ultra. The devices are expected to look broadly the same but have larger camera modules, boosting their photo and video capabilities.

The company may also discontinue its Galaxy Note line this year and replace it with S Pen support on its Galaxy S21 Ultra. Early renders don’t show a visible location for a stylus, which may mean it has to be housed separately from the phone when not in use. On Samsung’s popular — but niche — Note lineup, the stylus slides into the device for storage.

Samsung will also have a press conference at CES on January 11. On that event, it’s expected to focus on its TV and home appliance businesses, as it’s done in past years. Unpacked will be the last day of CES.

A January 14 date for Unpacked comes earlier than usual for Samsung. In the past, the company has typically unveiled its newest flagship phone in February, either slightly before or during the Mobile World Congress trade show, and then released the device in March or even April.

Samsung announced last year’s Galaxy S20 lineup and Galaxy Z Flip foldable on February 11 in one of the tech industry’s last in-person events before the novel coronavirus pandemic forced borders to close and governments to issue stay-at-home orders. The Galaxy S20 devices, all of which came with 5G, began preorders February 21 and hit stores on March 6.

The day after Unpacked, organizers cancelled the Mobile World Congress trade show in Barcelona, slated later in February. At that time, COVID-19 had infected more than 42,000 people and claimed more than 1,000 lives. That number has soared to about 85 million infections and about 1.8 million deaths, as the world grapples with a crippling new wave of the virus.