India hit by Bird Flu, Is Nepal next? 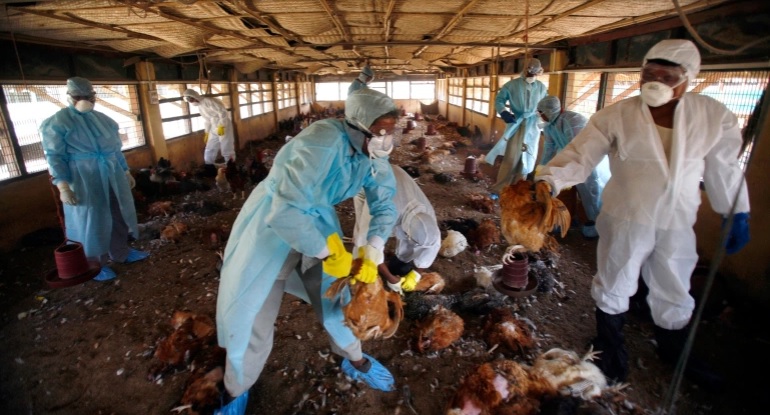 NEW DELHI: At least six Indian states have stepped up efforts to contain two strains of bird flu after the deaths of thousands of migratory birds.

Kerala, Tamil Nadu and Madhya Pradesh are among several states that sounded an alert to contain bird flu outbreak on Tuesday. The Pinarayi Vijayan-led Kerala government declared bird flu as a state-specific disaster and issued high alerts in Kottayam and Alappuzha districts. A total of 1,700 ducks died in the farm situated in the Kottayam district, suggest reports.

The state officials are planning to cull nearly 40,000 birds to prevent the spread of the virus. Alappuzha district collector banned the use and trade of meat, eggs of ducks, and chicken in the nearby region.

Tamil Nadu’s animal husbandry department has issued a high alert in the border districts following the bird flu outbreak in Kerala.  A team of a livestock inspector, a veterinarian, an attendant, two assistants to spray disinfectant will be stationed at check posts.  The team will check the entry of vehicles with chickens and ducks.

Karnataka, Maharashtra, and Madhya Pradesh governments have also issued a high alert in their states in view of avian flu spreading in neighbouring states.

In Madhya Pradesh, officials said that 155 dead crows had been found with the H5N8 strain in Indore since the pathogen was first detected in the city a week back. Madhya Pradesh veterinary department deputy director Pramod Sharma said 155 crows were detected with the H5N8 virus in the Residency area in the last eight days.

A survey is also being carried out in the Residency area to check people with symptoms like cold, cough and fever, a state health department official said, adding that no case of the H5N8 infection has been found in humans.

In Rajasthan, after Jhalwar, infected birds were found in Kota and Baran. Till Tuesday, 625 birds died in 16 districts of the state.

In Himachal Pradesh, 27,000 migratory birds, mostly bar-headed geese, have been found dead in Pong Dam lake in Kangra district. In Haryana, over four lakh poultry birds died at farms in the Panchkula district in the past 10 days.

India has witnessed bouts of devastating bird flu outbreaks in recent decades, most seriously in 2008, when millions of poultry were culled.

This virus can emerge as novel influenza strains with pandemic potential. Even though the first Avian influenza incidence in humans in Nepal was reported in April 2019, the threat of the disease remains unmitigated. Limited resources for surveillance, disease tracking, and weak health care facilities in low and middle-income countries will increase the possibility of the outbreak.

This means that there is strong risk of this disease here as well.