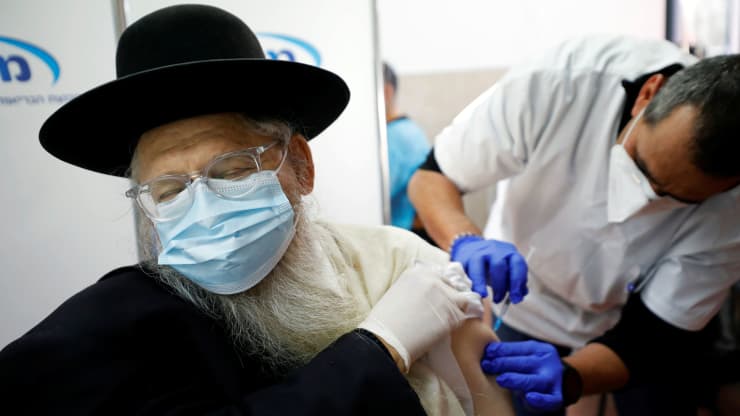 Jerusalem, 3rd January:
The NYT has reported that over 10 per cent of Israel’s population has been injected with the much-awaited Covid vaccine’s first shot. It is a breathtaking achievement that not only boggles the world but also uplifts the shattered image of the embattled Benjamin Netanyahu.
Since 20th December 20, Israel has beaten the small nation of Bahrain by going three times faster, as per data available online.
Opposed to that mightier nations have been left behind with fewer than a mere 1 per cent coverage in the US and even lesser among European nations. European countries received the shipments in December 2020. While their absolute numbers are higher, the ratios are much lower. Overall China, the US and Britain lead the total numbers.
Described as “an astonishing story,” by Prof. Ran Balicer, the chairman of the team of experts, it is the triumph of Israel’s robust e-governance and health system that practically tracks every person in terms of health data.
The meagre population of nine million also helps Israel, remarked Prof. Balicer, the CIO for Clalit, the largest health organisation.
The government seems to have done extremely well in the face of eroding public faith and the ever-rising numbers of Covid cases and fatalities, despite the small population size. The spate off three odd lockdowns proved totally inadequate in checking Coronavirus infections.
Israel has focused initially on target groups like health workers and older citizens, fast-tracking their second dose to be given by end January. The Pfizer-BioNTech vaccine is being given to over a hundred and fifty thousand citizens each day.
The PM, embroiled in charges of corruption, Netanyahu has played the commonly witnessed ‘superhuman-personal-efforts’ game to woo the voters.

The darker side of this achievement is that the vaccine is being delayed or denied to Palestinian settlements in Gaza and West Bank. While Hamas, the militant Islamic radicals are not expected to forgo their hostility, the responsibility rests squarely on the shoulders of Israel to show their greatness as a nation. It does not however seem that the two sides are willing to override the four letter word called ‘hate’, at least not at this moment.