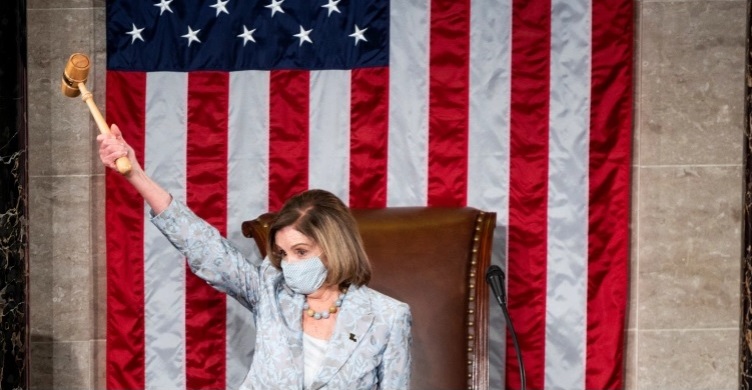 WASHINGTON: Nancy Pelosi rode on wafer-thin margins on Sunday to return as speaker, putting her in charge of her side’s weak majority while the Democrats plan for a hectic round of law-making because of the grave Covid crisis, sluggish economy and other longstanding issues.

Following tradition, she was handed the gavel by a grumpy McCarthy, the Republican opponent who lambasted her in his address.

“We begin the new Congress during a time of extraordinary difficulty,” she noted.

“Our most urgent priority will continue to be defeating the coronavirus,” she said from beneath her mask. “And defeat it, we will.”

The vote took hours due to Corona restrictions.

Pelosi has often clashed head-on with Trump’s, famously seen tearing papers behind his during house proceedings.

Opposed by a few members-elect, she ultimately won their support for her reelection.

Notable among those were Alexandria Ocasio-Cortez, a reputed Democrat in Washington, and new lawmaker Cori Bush, the first Afro-American from Missouri in Congress.

Pelosi, house leader of her party since 2003 and the sole woman speaker, won 216 votes versus 209 for McCarthy, who shall be the opposition leader.

The first test of the new Congress that convened with cumbersome COVID-19 sets the tone for renewed deliberations in reversing Trump-era policies. Biden’s priorities focus on health care and the environment.

Law-making may be a challenge for Pelosi because the slim majority may prove the weakest link with any dissent within democrats.

Republicans, with their stubborn loyalty to the noisy Trump, may not fully cooperate. The Congress will again convene to officially affirm Biden’s clear election victory. Many House and Senate Republicans claim that they will contest the validity, though their efforts are doomed.

Another test that awaits Democrats is controlling the Senate. Republicans will hold sway unless Democrats triumph in the Senate runoff elections in Georgia.