Election will be successful through mutual partnership, cooperation, collaboration and inter-relations: CEC Thapaliya 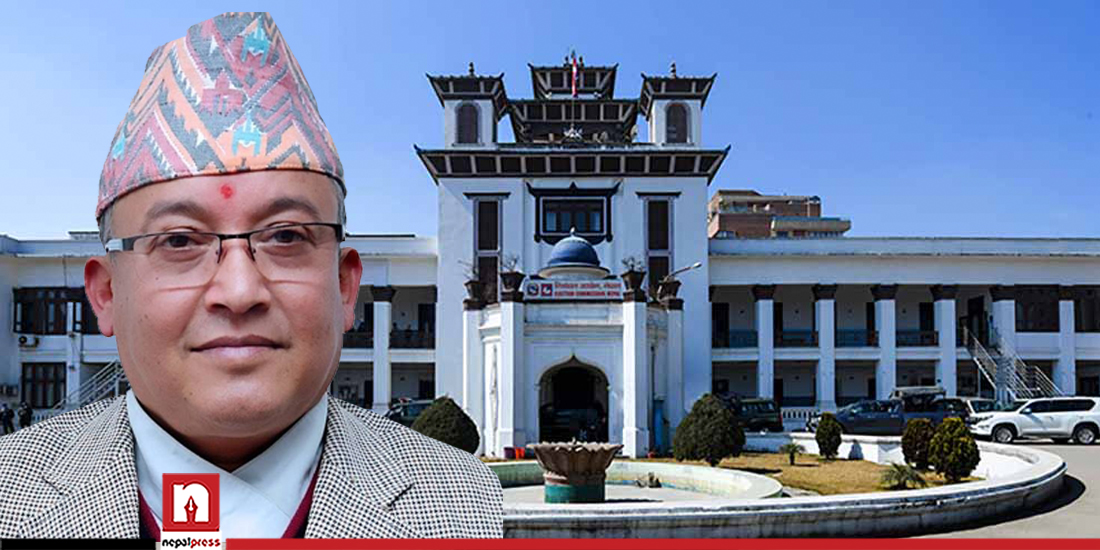 KATHMANDU: The nation is all prepared for the November 20 elections to the House of Representatives and Province Assembly. This general election is a part of a series of important and mandatory dimensions that render the democratic system vibrant.

The Election Commission, the Government of Nepal, employees, security personnel, observers, stakeholder sides and all the voters are joining hands to conduct the election in a free, fair, impartial, transparent and fear-free environment.

Chief Election Commissioner (CEC) Dinesh Kumar Thapaliya is convinced that the political parties and candidates should get victory in the election on the basis of ideology, thought and policies and programmes rather than position, money and enticement for upholding the integrity of the elections. CEC Thapaliya, who also has the experience of serving as the Secretary of the Government of Nepal, is confident that the election would be held successfully with the mutual partnership, coordination and interrelation.

RSS’ Deputy Chief Reporter Narayan Prasad Neupane and Senior Reporter Prakash Silwal spoke with CEC Thapaliya regarding the overall preparations and management of the election. The excerpts of the interview:

Q: Does the EC intend to make the transport service operation system flexible on the day of voting?

A: The EC wants to see the mobility of media persons and people involved in other essential services sectors systematized within the district and make the movement convenient and accessible to destinations.  We believe that the people’s mobility during the elections will not have its impact on the election impartiality.     It has been asked to facilitate the transport of incapacitated and senior citizens to and from the polling stations for the voting.

Q: The number of invalid ballot papers was noticeable in the latest local level election. Could we hope for improvement with regard to it this time?

A: The issue raised in design with the style of ballot papers has been addressed this time. This time the ballot paper is voter-friendly and we expect a reduction in the size of invalid papers.

Q: Could you share with us about the modality of monitoring implemented for the monitoring of election expenses by election candidates and political parties?

A: We had to sit for dialogues and discussions with political parties and stakeholders concerned in our bid to make the provisions regarding the Election Code of Conduct and the expenditure ceiling more and more applicable.  We believe the principle that the election is a means of making people aware of parties’ policies, ideologies and principles and convincing them to vote for the support by discouraging the culture of election extravagance and glitz has been established. Political parties and candidates have been informed about the ceiling of election expenditures and security bodies have been requested to monitor its implementation.  We are free to go for an audit (on a need basis) of the details of election details to be submitted by the parties after the election.

Q: Are political parties and candidates more positive this time in terms of the implementation of the Election Code of Conduct and expenditures ceiling?

A: This election has been a success to send a message that we, instead of second or third parties, are more responsible for abiding by the Election Code of Conduct and related norms and values.

The election  and its results will in a relative term be largely based on the delivery, performance, ideologies, dedication,  principles, thoughts, election manifesto, integrity and election publicity campaign not by the positions, powers, social prestige, or money.     We assume the election ahead will be greatly guided by the above based factors.

It has established the belief that the election is also a means of changing the system, not just its characters.  Moreover, it has been established that the periodic elections should be conducted within the announced date. “The price of any delay in ensuring the timely elections is unbearable for the nation and the public.”

Q: What types of support and cooperation the Commission is getting from the political parties, the government and the international community to systematize the election procedures?

A.First of all, the government is extending all sorts of support: including finance, human resources and security demanded by the EC since the beginning.

We have cordial relations with the international community and it is closely watching the election atmosphere. Two international organizations, 18 diplomatic missions based in Kathmandu, chief elections commissioners from four countries and some election commissioners are taking up roles of election observers this time. The EC has continuous cooperation from the USAID and UNDP ESP, and IFES has been ensured for the voter education campaign. The Government of India provided 80 motor vehicles for election purposes this time. We have got words from others to ask for help required for promoting election impartiality and credibility.  We have abundant support from the media and civil society for making the elections successful.

However, aside from publicity, the party’s ideology and principles have played a major role.

We are working hard to save the integrity of elections. One should not argue that voters’ education and election atmosphere were not enough just because these things did not happen this time. The process has switched through the digital medium. We made the digital platform a medium of election publicity.

The form of election publicity has changed. It is not that there is not an election atmosphere, the EC views.

This time, we are assured that any individuals including employees, security personnel, voters, civil society and media-persons assigned for the polls would not face difficulties and discomforts from any political parties and groups of people.

An environment conducive would be created wherein voters can fearlessly cast their vote as foolproof security arrangements have been made. The EC is mindful of the possibility of affecting the election management and operation through fake and misleading information and defamatory statements on social media at home and abroad being influenced by political interests.

I urge all voters to exercise their franchise by voting for their favourite political parties and candidates without being influenced, fear and threats as the EC has made necessary security arrangements and completed all managerial work related to the operation and management of the polls.

I would also like to inform you that the Commission has issued special instructions to election staff, security persons, observers and monitoring team members or any individual to inform the concerned authorities about any activity imperiling the election process that comes to their knowledge.

The Commission has also asked the concerned authority to take action against the wrongdoers.

Also, if any one was found influencing others or threatening or intimidating, the Election has asked the election staffers to inform the concerned authorities.

Security personnel have been mobilized to prevent the untoward activities that could imperil electoral process and affect the fairness of the election such as boycotting the election and impending election, booth-capturing, depriving voters from voting rights, threatening, intimidating the voters among others.

Three-tier security arrangements are put in place in every polling center for election security. A ‘reserve force’ is in place which could reach the site within 30 minutes to deal with untoward activities.

Security patrols are arranged based on the election security risk. High-powered mobile team of security personnel have been deployed to ensure the election is held in a peaceful environment.

Local administrations and District Election Code of Conduct Monitoring Committee have been activated for effective implementation of prohibition of sales, distribution as well as consumption of alcohol since Thursday midnight to the day vote counting is completed.

Vote counting is to begin immediately after all ballot boxes are received after the voting process is over. Any minor disputes or issues arising while vote counting be resolved promptly rather than elongating it.

If any issue emanates, the Commission will take judicious decisions for its

resolution. There is no point in elongating the dispute when we are pledging to provide with all resources and human resources.

This time, the financial incentive for the human resources to be deployed for the election is good. We are confident that we could publish all election results within seven days from the first day of the vote counting.

We can do all the work and present the report to the President within two days after the political parties give the details of the election held under Proportional Representation. It should not take longer than December 8.

We are committed to conduct the election efficiently and effectively so that there is no criticism.

Likewise, we are preparing to devise a system through which the mass media get the information or result of vote counting as it comes to our information system.

We are encouraging the election staff to set up an information unit in each polling center and give hourly updates about the activities relating to vote counting.

By doing so, accusations for delaying dissemination of vote counting results will be quelled and there will be ease in accessing and disseminating information.

In such a context, the Commission verifies the incident before taking any decision about re-election.

Cent per cent voter turnout sounds appealing to ears but the statistical analysis of the election show that it is difficult to embrace such turnouts. RSS