Support from the international community against the COVID-19 pandemic

What kinds of international assistance has Nepal received against the coronavirus crisis? 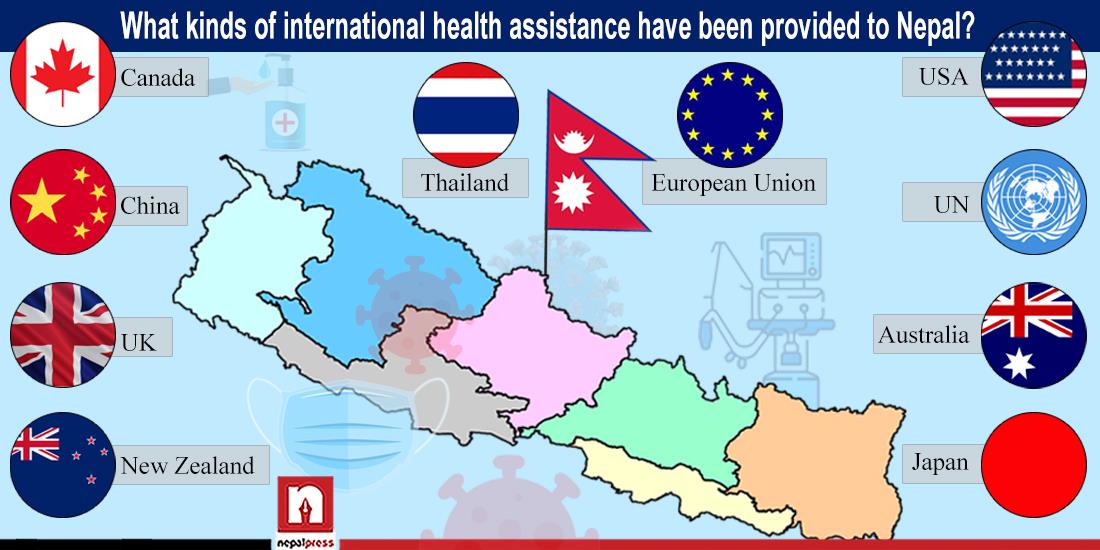 KATHMANDU: The Ministry of Health has said that the coronavirus infection rate might rise again from the last week of July. At a Press Conference held on 25th May, Health Secretary Laxman Aryal indicated that a third wave of the virus infection could begin in mid-July.

The government has announced mid-term elections in November. Prime Minister KP Sharma Oli has said that the vulnerable groups will be vaccinated against COVID-19 before the elections. The government plans to vaccinate 75% of the population.

Although the government is making efforts through diplomatic and political means for immediate supply of vaccines, there have been no conclusive decisions yet. The Ministry of Foreign Affairs has repeatedly corresponded with vaccine-producing countries and the COVAX facility. The Serum Institute has stated that their supply of vaccines will start only from the end of the year 2021.

Not only has Nepal’s vaccination campaign been affected by the unavailability of vaccines from Serum and COVAX, but even those citizens who have received the first dose are having to wait a long time for the second dose. The government has decided to give the second dose to citizens above 65 years of age who have taken the first dose within 12 to 16 weeks.

Shortly after Prime Minister Oli announced that he would hand over responsibility for vaccine supplies to the Foreign Ministry, a meeting of the Ministry decided to mobilize all diplomatic missions for international assistance. At present, Nepali missions abroad are taking initiatives with the governments of the countries concerned to supply vaccines and mobilize humanitarian aid. The Prime Minister himself appealed to the international community to help Nepal fight the epidemic through Western media such as CNN, The Guardian and Japan’s Future of Asia Forum. 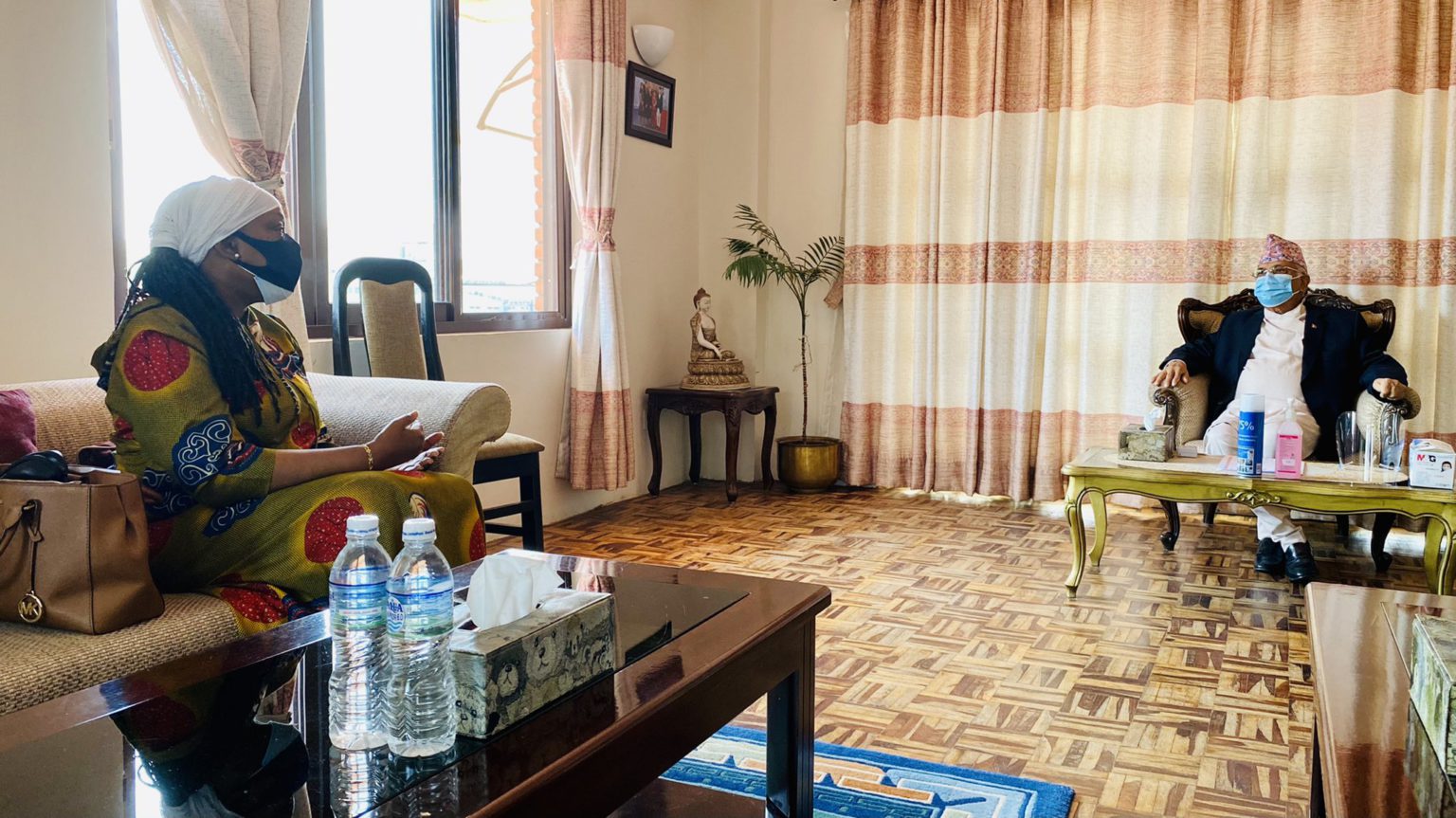 As of 25th May, 6,700 people have died due to the virus in Nepal and the total number of infected people has reached 528,000. The daily number of infected is over 8,000 and the daily death toll is around 200. The number of active infected has reached 117,000. As the infection rate continues to rise, the capacity of health institutions has not been able to handle the second wave well. Hundreds have died due to lack of oxygen. A severe lack of health equipment like oxygen cylinders, ventilators, concentrators has been observed.

India has temporarily banned the export of vaccines to countries including Nepal due to rising infection and death rates. As other health equipment could not be sourced from its southern neighbor, Nepal began looking for alternatives to India for vaccines and emergency equipment. For this, a diplomatic mechanism was mobilized and Nepal appealed to other countries for help. And so began the cycle of international assistance to help Nepal fight the COVID-19 pandemic.

Although the vaccine will not arrive immediately, Nepal is now receiving essential health supplies and humanitarian assistance. Foreign missions, including powers such as China, the United Kingdom and the United States, have been mobilizing aid to Nepal on a daily basis. The Nepal office of the United Nations has asked the World Health Organization to keep an eye on Nepal’s daily infection rate and situation. The Chief of the World Health Organization, Dr. Tedros has said that Nepal needs immediate humanitarian assistance.

What kinds of assistance has been received from foreign countries? 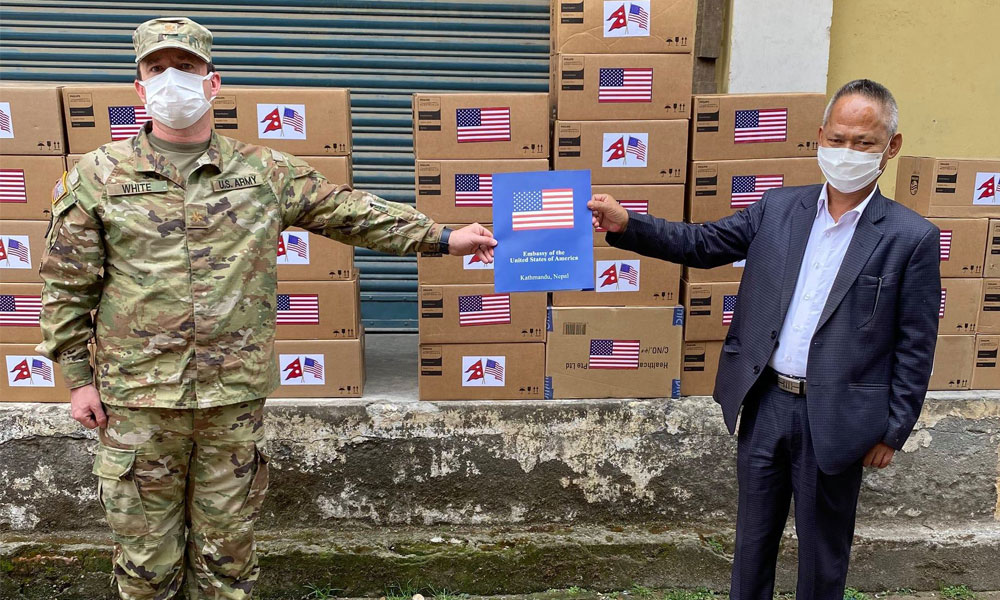 About 6 billion in aid from USA

On April 30, the US Senate formally discussed Nepal’s coronavirus crisis. Senator Chris Murphy and others on the US Senate Foreign Relations Committee said that Nepal’s situation was critical as India banned the export of health products. Jeremy Kondak, a senior advisor to the United States Agency for International Development (USAID), said it was planning to provide additional assistance to Nepal.

According to Ambassador Randy J. Berry, the United States has provided USD 50 million (Rs. 5.82 billion) in medical assistance to Nepal since the outbreak began.

The United States has provided 1,000 units of oxygen cylinders, 100 units of ventilators, test equipment, oxygen equipment, PPE and gloves to Nepal this year. US Ambassador Berry said he would bring more medical supplies to Kathmandu by chartered aircraft later this year. The assistance provided by the United States includes oxygen plants, cylinders and storage tanks announced by its Indo-Pacific Command. The Command has provided 5.8 million in health care after April 2020.

This week @USAID is airlifting urgent #COVID19 supplies to Nepal. Since the beginning of the pandemic, the American people have given Nepal over $50 million in COVID-19 assistance to #beatthevirus, and we’ will continue to do so. ???? @USAIDNepal @USEmbassyNepal pic.twitter.com/S8GbYnAgby

Speaking to the Nepal Press, Anna Richie Allen, Spokesperson for the US Embassy, ​​said the United States had committed an additional USD 2 billion to the United Nations vaccination facility COVAX.

On Monday itself, Foreign Minister Pradip Kumar Gyawali had a telephone conversation with US Deputy Secretary of State Wendy R. Sherman. Minister Gyawali had requested that the United States distribute 80 million doses of vaccine to Nepal. In response, Sherman replied that Nepal was a priority for the USA.
The US AID Project Direct-Relief is also providing Nepal with the necessary health supplies to fight the pandemic. The 25-tonnes of health supplies provided by the project left the United States for Nepal on Tuesday. The cargo aircraft, which will fly from Chicago to Kathmandu, will bring 860 oxygen concentrators from the United States to Nepal. 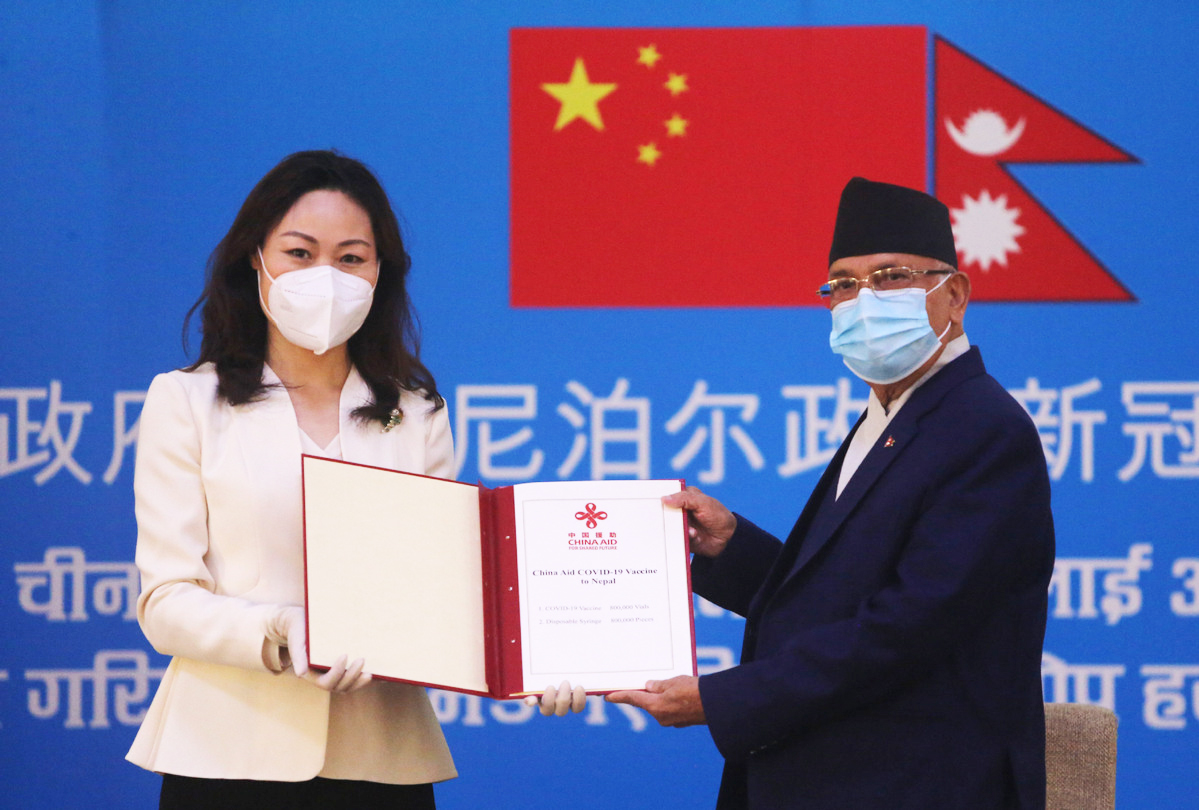 Even in the second wave, China’s activism in helping Nepal is seen to be consistent. After the first wave, China has provided 800,000 doses of vaccine developed by Sinopharm to Nepal. In the second wave, China has provided oxygen, ventilators, concentrators and other health items. An aircraft of Nepal Airlines Corporation had brought 400 units of oxygen cylinders and 10 units of ventilators from China on 11th May. This included 160 units of oxygen concentrators and 30 tonnes of health supplies.

Tibet, an autonomous region of China, had provided 150 tons of oxygen cylinders and 30,000 liters of liquid oxygen to Nepal on 22nd May. The goods were brought through the Nepal-China border Tatopani. According to the Nepalese Consulate General in Lhasa, Tibet has announced additional medical supplies, 200 ICU beds, 5 ventilators, 10 oxygen concentrators, 800 oxygen gas cylinders, and 700,000 surgical masks.

Having supplied 300 million doses of COVID-19 vaccines to the world, China will provide still more vaccines to the best of its ability: Xi https://t.co/FEttC8nXrz pic.twitter.com/FsjqpAutMa

Nepal’s private sector has already imported 9,850 cylinders from China. In a virtual meeting with the foreign ministers of the five SAARC member states Nepal, Afghanistan, Bangladesh, Sri Lanka and Pakistan on 27th April, China announced that it would provide 5 million Yuan worth of medical supplies to Nepal. China’s assistance also includes 650 units of oxygen concentrators, 20,000 units of oxygen nasal cannulas and 20,000 face masks.

On 19th May, China’s Sichuan Province provided 3.6 million Yuan worth of 300,000 surgical masks, 162,000 N-95 masks, 10,000 PPEs, and 500 ear thermometers, according to the Foreign Ministry. Chinese private organizations have also provided healthcare to Nepal. 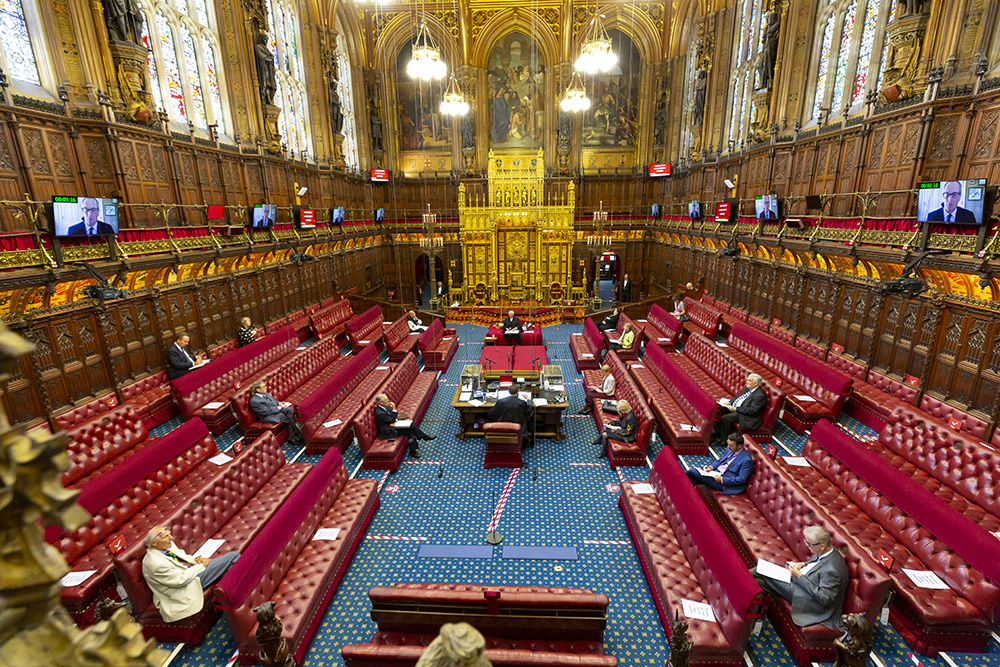 What has the UK provided?

The pandemic situation in Nepal and possible assistance was discussed in the House of Lords, the upper house of the British Parliament, on 8th May. Responding to a question raised in the Parliament for about 11 minutes about Nepal, Lord Ahmed of Wimbledon on behalf of the British Foreign Office said that the UK would provide 2 million doses of vaccine to Nepal through the COVAX facility. Earlier, Nepal had been provided 348,000 doses of vaccine through COVAX.

The United Kingdom has provided 548 pounds in aid to COVAX, and Nepal will receive assistance under that, said British Ambassador Nicola Polit. The UK has provided essential health care to Nepal under UKAID. Under the British aid mission, equipment and materials including oxygen concentrators and PPE have reached the province hospitals.

On 20th May, Prime Minister KP Sharma Oli called on Ambassador Polit to Baluwatar and requested that the AstraZeneca vaccine be made available as soon as possible. In response, Polit said that they were positive at the request of the Prime Minister. The UK has also set up an oxygen plant with 160 large cylinders at the Maharajgunj Police Hospital. 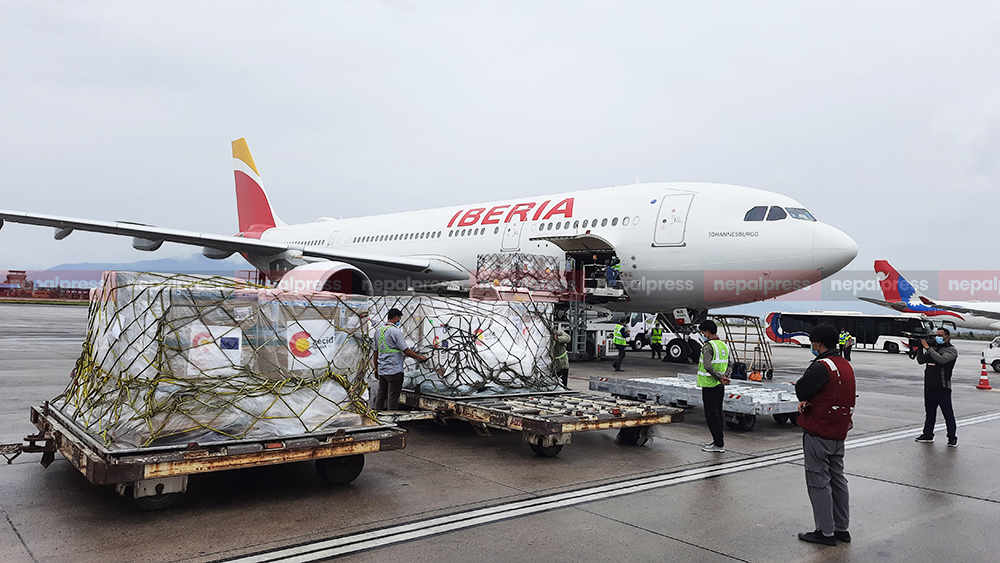 The European Union (EU) has announced to provide 2 million Euros (280 million NPR) to Nepal. In addition, a medical team will also be mobilized. The EU will provide oxygen gas cylinders, oxygen concentrators, home care and antigen test kits, PPE, to Nepal, including the monitoring and treatment of those living in isolation, and a team of doctors operating in emergencies. EU Crisis Management Coordinator Janez Lenarcic said the EU would also provide more assistance.

EU member Spain has also provided emergency health care to Nepal. The materials brought on a chartered aircraft from Madrid were handed over to the Ministry of Health on 20th May. These include 50 oxygen cylinders, 20 oxygen concentrators, 77 ventilators, 14 respirators, 164,000 antigen kits and 2.4 million masks. 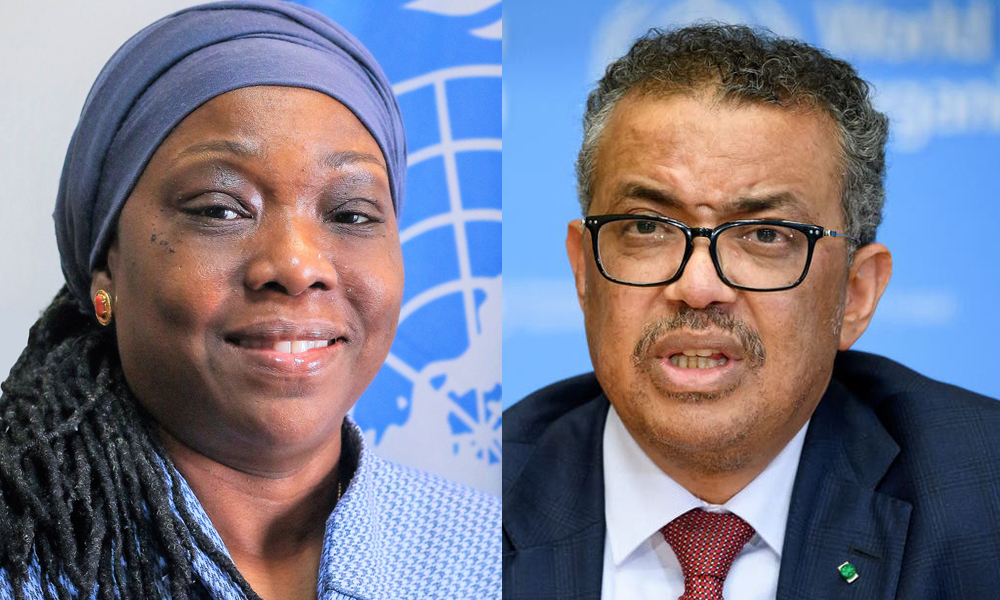 Partnership of the United Nations

The United Nations in Nepal and its partners have launched the Emergency COVID-19 Plan, set up a 83.7 million dollar fund to support a population of 7.5 million over the next three months, and will operate the fund.

UN Secretary-General Ban Ki-Moon called for immediate action and international solidarity to save lives and alleviate unnecessary suffering in the coming days.

Stating that the situation of the virus in Nepal has become dire, the United Nations is also immediately pointing out the concerned agencies for the supply of vaccines and humanitarian aid to Nepal, which can be clearly seen in Nyanti’s recent tweets. 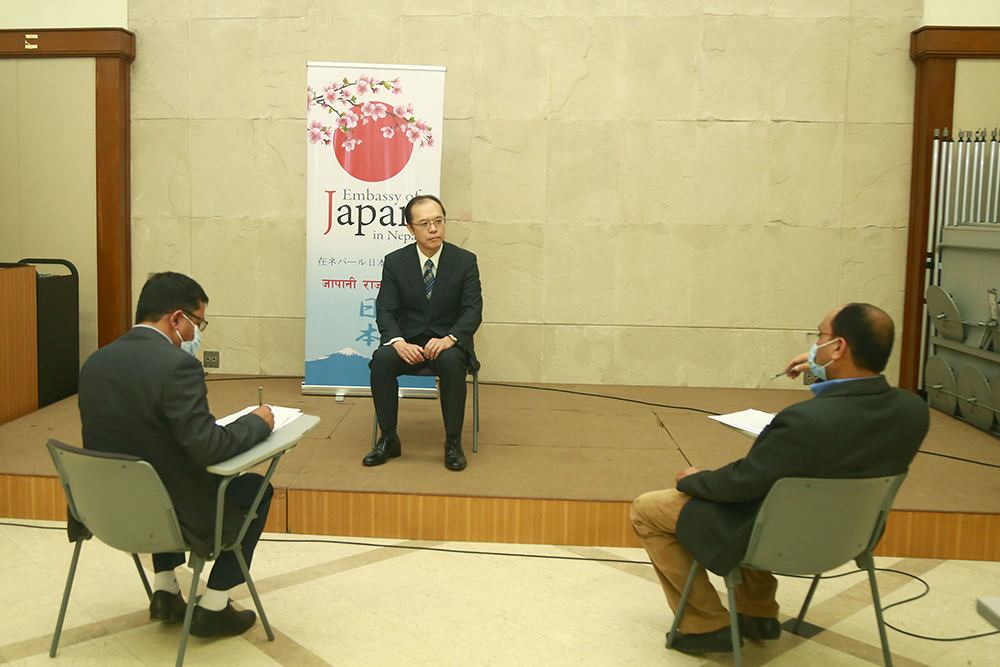 Japan has provided portable ultrasound image diagnostic system equipment to 23 hospitals in Nepal to assist in the treatment of COVID patients. The Japanese Embassy in Kathmandu has issued a statement saying that Japan is preparing to provide 160 oxygen concentrators and six ambulances next month.

Australia has stated that it will provide Rs 634.8 million (7 million Australian dollars) to Nepal against the pandemic. A statement from the Australian Embassy said the aid was part of a 17.5 million package to Bangladesh and Sri Lanka in South Asia, including Nepal. The assistance provided by Australia includes essential equipment including oxygen to the province hospitals and PPE for health workers.

Australia has said it will work with Europe, the United States and the United Nations to fight Nepal’s pandemic. 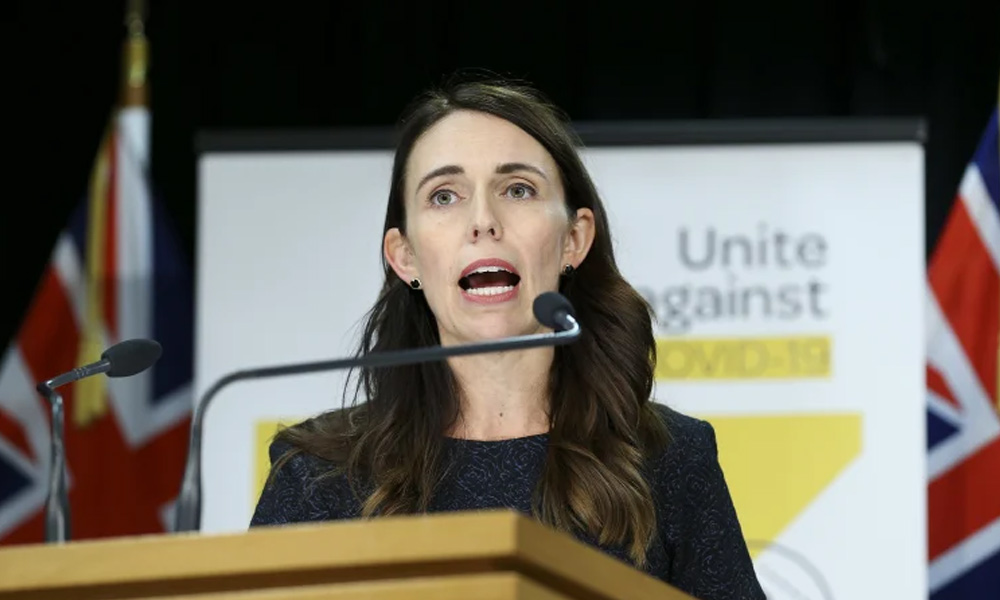 Canada has announced to provide 1 million Canadian dollars (96.5 million Nepali rupees) against the pandemic in Nepal. In a statement issued on 24th May, the Canadian Ministry of Foreign Affairs said that Nepal needed the necessary medical equipment, ambulance services and blood donation equipment to fight the second wave of the virus. Canada has stated that it will establish hygiene stations and provide other health facilities in the community. 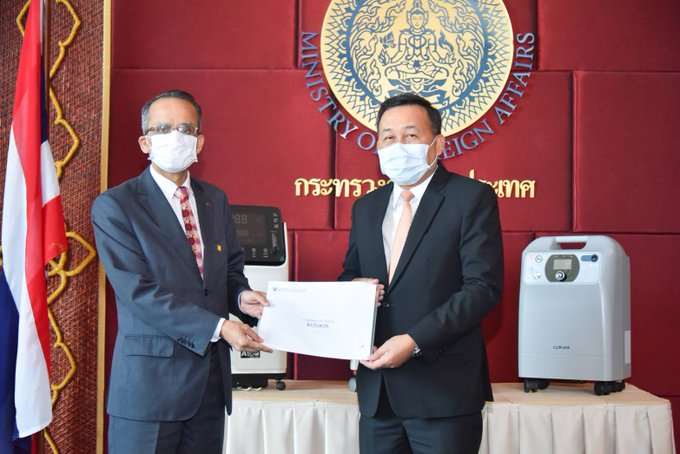 Thailand, a member country of BIMSTEC, has provided 46 oxygen concentrators to Nepal to fight the pandemic on 24th May. The materials were handed over to Ambassador Ganesh Dhakal at a function in Bangkok. The goods will be brought to Kathmandu by a flight of Shree Airlines on Friday.

The Foreign Ministry said it was receiving aid supplies and would set up the necessary health infrastructure to meet the challenges of the third wave of the virus. The Ministry also said that the supply of vaccines will be decided by the big countries within a few weeks. Talking to Nepal Press, infectious disease specialist Dr. Anup Subedi urged to establish necessary health infrastructure and ensure supply of vaccines before the third wave.

Bloomberg figure depicts how uneven the COVID vaccine distribution is. Out of 1.65 billion plus doses administered so far (till yesterday), 1.57 billion doses (95%) are used only in 15 countries. More collaborative approach is needed, because no one is safe until we all are safe. pic.twitter.com/lWz2Ca3AEm

Foreign Minister Pradeep Kumar Gyawali expressed dissatisfaction over the unequal supply and distribution of vaccines in a tweet on Tuesday. Sharing a Bloomberg report, he said on Monday that 1.65 billion doses of vaccines have been administered worldwide, 95% of which have been done in 15 large countries. “More collaborative approaches are needed, because no one is safe until we all are safe,” Gyawali said. He has also urged to ensure equal supply of COVID-19 vaccines.