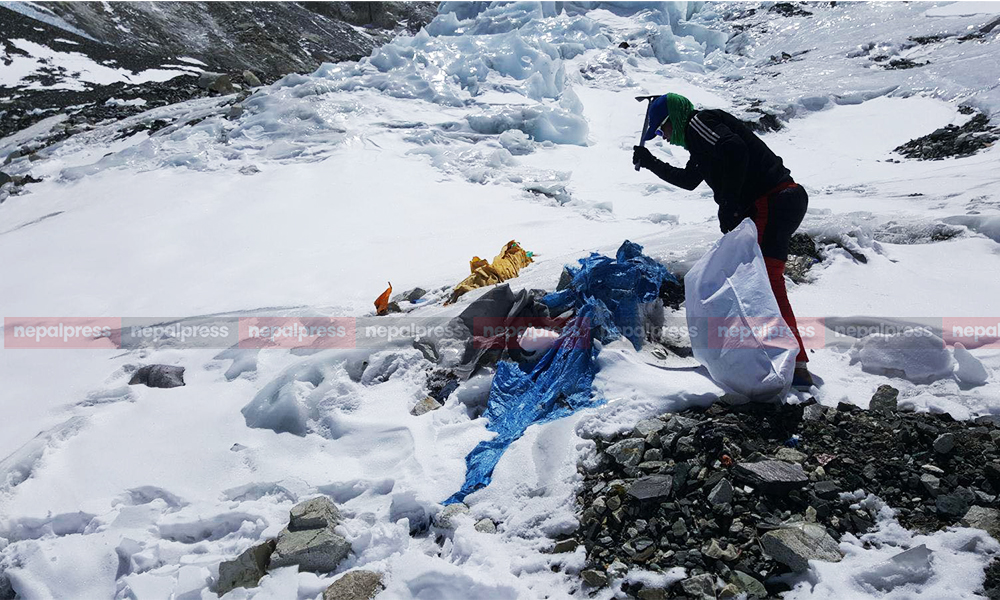 The Nepal Army is busy cleaning up Mount Everest while wearing Personal Protective Equipment. It has cleaned Mt. Everest from Base Camp to Camp Two.

Some foreigners who were climbing Mt. Everest were said to have contracted the COVID infection, thus the army used PPE to clean up the area.

About 400 climbers from 42 expeditions have reached the base camp at Mount Everest in the spring season. The Nepali Times English Weekly has even termed the crowd of climbers ‘Everest City’.

Aditya Karki, Coordinator of Nepal Army’s ‘Safa Himal – 2021’, said, “We have cleaned the area after wearing PPE to avoid COVID-19 infection as much as possible.”

A team of Nepal Army reached the Sagarmatha Base Camp in the third week of April. The army aims to collect 16 tons of garbage from the Everest region under the ‘Safa Himal’ mission.

In 2013 and 2019, the army, which has been active in mountain clean-up, had collected 4 and 10 tons of garbage respectively.

With the slogan ‘Save the Himalayas for the Future’, the Nepal Army in the ‘Safa Himal-2021’ mission is cleaning 6 different mountains of the country simultaneously.

The army is cleaning up Lhotse, Pumori, Amadablam, Makalu and Dhaulagiri mountains including Everest.

The army has stated that it will end the campaign by handing over the non-perishable garbage collected from all the mountains to the recycling organization on the occasion of World Environment Day.