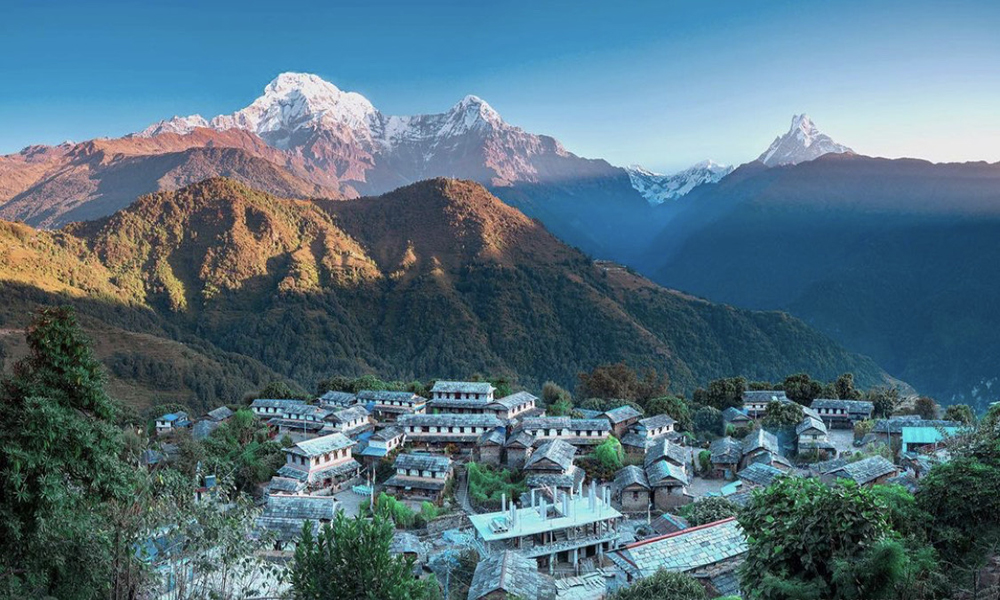 Fascinating GHANDRUK: An amalgamation of beauty and culture

POKHARA: Three pedestrians are on their way uphill, climbing through steep village roads. They plan to reach Chhomrong on the evening of 26th January. Their destination is Annapurna Base Camp.

As they are about to cross the village, a herd of mules appear towards them. They stop to watch; a rhythmic music is playing from the bells tied to the mules’ necks. Cameras emerge, photos are taken. Tired faces are filled with joy.

The warm rays of the sun greet Dhungeni, a cosy little village, every morning. As drapes are drawn, sunlight reflects through the peaks of the Annapurna range – including those of the magnificent Fishtail (Machhapuchhre).

All guests that come here to escape the hustle and bustle of the city are enchanted. They slowly stretch out their arms and exclaim, “Wow, what a beautiful village!’

This is the story of Ghandruk Village.

Green vegetables are grown all over the village. These crops are for guests. With increase in tourist arrivals, dry slopes of the village have become lush and green.

Local tourism entrepreneur Kisam Gurung says, “Even if we have to bring other food items from Pokhara, we use locally grown green vegetables. This is the identity of hotels in Ghandruk.”

Gurung is also the Chairman of the Tourism Management Committee of Ghandruk village. Son of a Lahure, he spent the energetic years of his youth overseas. Returning after a long period of time abroad to his hometown, he saw a herd of tourists in Ghandruk. Upon pondering, a thought struck – “There are plenty of options here itself. I have to do something here.”

He started dreaming of investing in the village through his earnings abroad. With an investment of around Rs 40 million, he started a hotel in the village four years ago and named it “World Village Hotel”.

Gurung says, “There is no one in our family who carries out business like this. All are from Lahure background. However, I returned to the village after seeing ample possibilities and opened a hotel. I have no regrets.”

While youth from other villages are leaving their homes under various pretexts and fleeing to the city, the exact opposite is happening in Ghandruk. Like Krishna, most youth from Ghandruk have now returned to the village and are keen to invest in various tourism businesses. The local tourism entrepreneurs claim that sustainable development in tourism can be achieved by engaging in local tourism business and promotion of the village.

“Here, the tradition is Lahure culture. The village used to be completely deserted due to the practice of them being recruited in the army or military of other countries and ultimately settling down there itself,” says Kisam Gurung,

“However, the situation has changed. Young people who have gone abroad also shorten their stay and come to invest in the village as much as possible.”

There was a point where most had watchmen to take care of their homes in Ghandruk as the owners had left for abroad, according to Gurung.

With the onset of the COVID pandemic, the government announced a lockdown on 24th March 2020. Ghandruk, which had been closed since then, reopened only after about 10 months. Although the lockdown was lifted from the third week of November, Ghandruk was opened for visitors from January 15th. The village remained quiet for ten long months during the lockdown.

Chairman of Ghandruk Tourism Management Committee Kisam Gurung says that up to 150 domestic tourists are coming to the village daily.

Gurung informed that there was no presence of foreign tourists as the pandemic had not subsided even after the lockdown. “Once Ghandruk opened for visitors, there has been a significant influx of domestic tourists,” he said. “There is no condition where hotels have to be left empty.”

Tourism entrepreneur Krishna Gurung says that there is a pleasant ‘revival’ in Ghandruk tourism, even after a long lull. “We have been closed for about 10 months due to the pandemic. However, the hotels do not have to remain vacant even now. We are having a pleasant experience,” he said.

There are about five dozen small and big hotels in Dhungeni Village, Ghandruk. They can accommodate up to 1,200 people in one night, says Kisam Gurung, Chairman of the Ghandruk Tourism Management Committee. “It used to take two days to reach here from Pokhara. As it has now become a four-to-five-hour drive, the number of guests has increased,” he said.

Gurung said that new well-equipped hotels are being built and once those come into operation, the capacity to accommodate guests will increase further. As Ghandruk is more popular for camping than homestay, he informed that hotels are being opened accordingly.

When Kisam Gurung opened ‘Gurung Cottage’ in Ghandruk of Kaski 25 years ago, everyone called him ‘crazy’ as the norm was to be a part of the Lahure culture. Relatives made such allegations as Ghandruk had no transportation facilities and tourists seldom arrived.

However, Gurung did not give up. He built a hotel in Ghandruk by transporting goods from Pokhara. “At that time, I had opened a hotel by bringing goods from Pokhara. If that money had been used to buy land and build a house in Pokhara, I would have been able to make three or four,” he recalls old days. “When tourist flow started increasing, however, others from the village started to open hotels too.”

In the beginning, Ghandruk was popular for trekking, but nowadays vehicles reach the village, blowing dust along the way. Even though it is known as Dhungeni, which means ‘stone-paved’, most houses look modern now. Pedestrians keep complaining about the dust and dirt after motorable roads have been constructed.

Urban culture started creeping into the village as soon as motorable roads reached Ghandruk. Gurung, Chairman of the Ghandruk Tourism Management Committee, admits that originality is disappearing in the village, which has a rich Gurung history. He questions, “There are a lot of young people doing business here now. Are they losing their originality as they adopt newer, modern styles?”

Gurung says that new styles are entering the village easily as it takes a lot of stone and wood to build houses in the old style. “People cannot be told what kind of houses to build, as the land that the hotels are built on is privately owned. They are building houses in the new style as it takes a lot of time and effort to build in the old style,” he said. “It cannot be denied that everything is changing with better infrastructure and development.”

Ghandruk village, which has a majority of Gurungs and some Dalit settlements, is now trying to return to its old styles after the allegations that it was losing its originality, according to Kisam Gurung.

“Now, we feel the need to return to the old format. We have started saying that at least the roof of the house should be built in the old stone style,” he said, “This has also brought some pleasant impacts.”