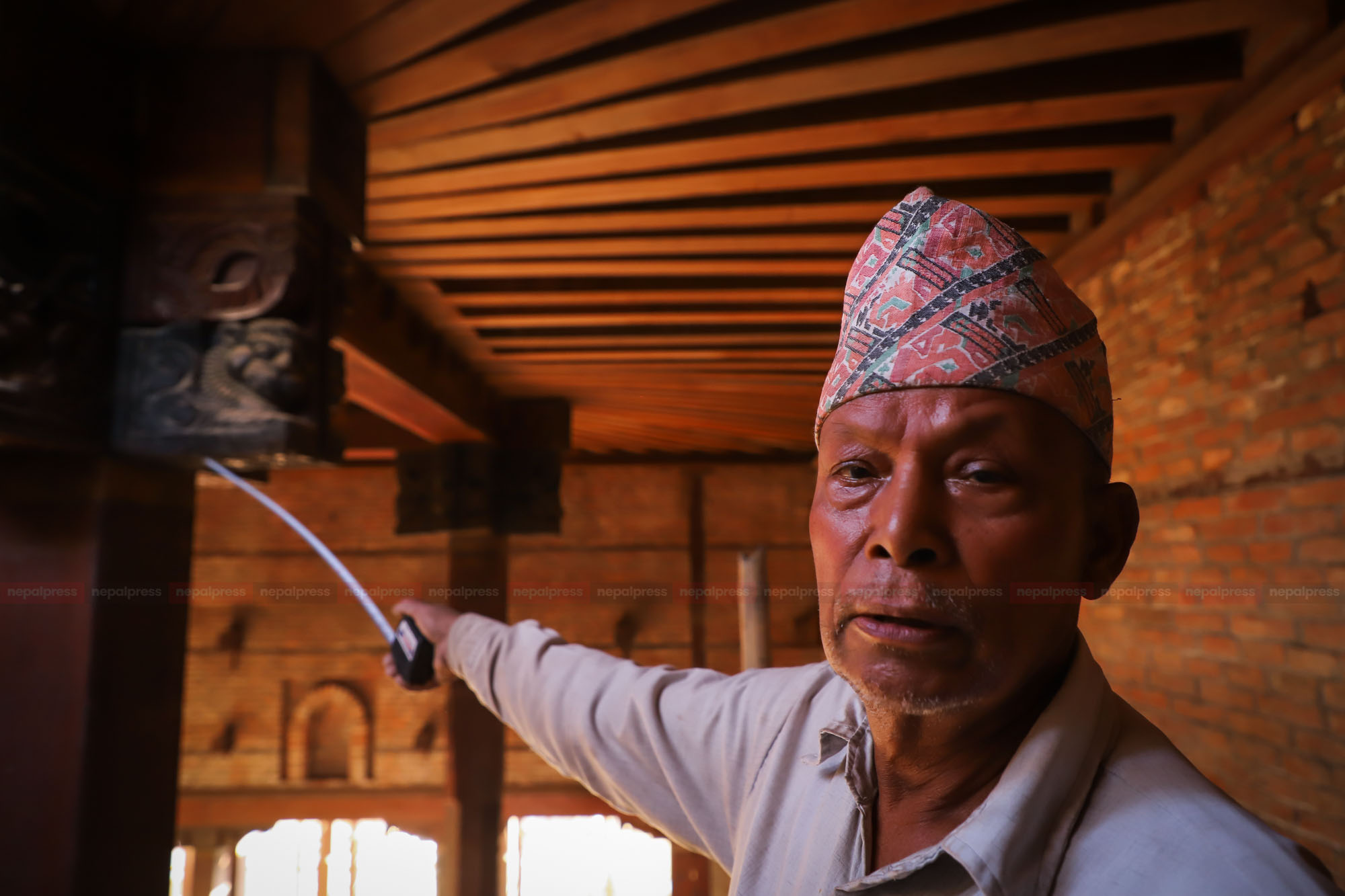 KATHMANDU: Laxmi Bhakta Rajchal, 73, has no less energy than in his youth. He is now devoting his energy to building a centuries-old wooden pavilion. He wants to associate his name with Kathmandu. They say: What goes with you after death? If the wooden pavilion is rebuilt, my name will be added to it!

The wooden pavilion is being rebuilt after it collapsed in the 2072 BS earthquake. As easy as it seems to build the country’s historic heritage wooden pavilion, it is just as challenging to restore it to its former glory. Accepting that challenge, Laxmi Bhakta has taken the responsibility to move ahead with the construction work.

The Kashthamandap Organizing Committee worked hard to find skilled and experienced carpenters. However, even so-called skilled carpenters did not dare to build wooden pavilions. At the same time, Lakshmi Bhakta took charge of the construction of the wooden gazebo.

Recalling when he was made responsible for rebuilding the wooden pavilion, he says that the managers were looking for skilled carpenters. He called me one day and asked, “Can you build a wooden pavilion?” speechless for a moment. I thought to myself; I can do this job with more than 60 years of experience. And promptly I said – ‘I can!’ Happiness spread on their faces. A few days later, I started working.

The historical pavilion—a rest house for traders crossing the trans-Himalayan route that connected Tibet to India—holds immense cultural and symbolic importance. After the earthquake destroyed it, it rises again to its former glory – but no lesser credit is owed to the restorers – whose rare and precious skills are making a faithful rendition of the age-old building possible.

Immersed in Carpentry and Wood Carving – from the age of nine

“This is life in dry money, dry money,” he said with a laugh, “I was nine years old when I first went to work.” Now his daily wage has reached two thousand rupees.

Although Laxmi Bhakta took up the profession of a carpenter, she was confined to village work before 2045 BS. In the year 2045, there was a big earthquake in Nepal. That earthquake brought catastrophe among Nepalis. But the earthquake became an opportunity for Laxmi Bhakt’s artwork.

The quake destroyed monasteries and temples in and around Kathmandu. And that’s where he got employment. From that time on, he became acquainted with the Archaeological Department of Nepal. Laxmi Bhakta soon came to the notice of everyone due to her habit of doing hard work easily.

He rebuilt the temples in Kathmandu, Bhaktapur, Panauti, Banepa, and other areas that were exhausted by the earthquake. 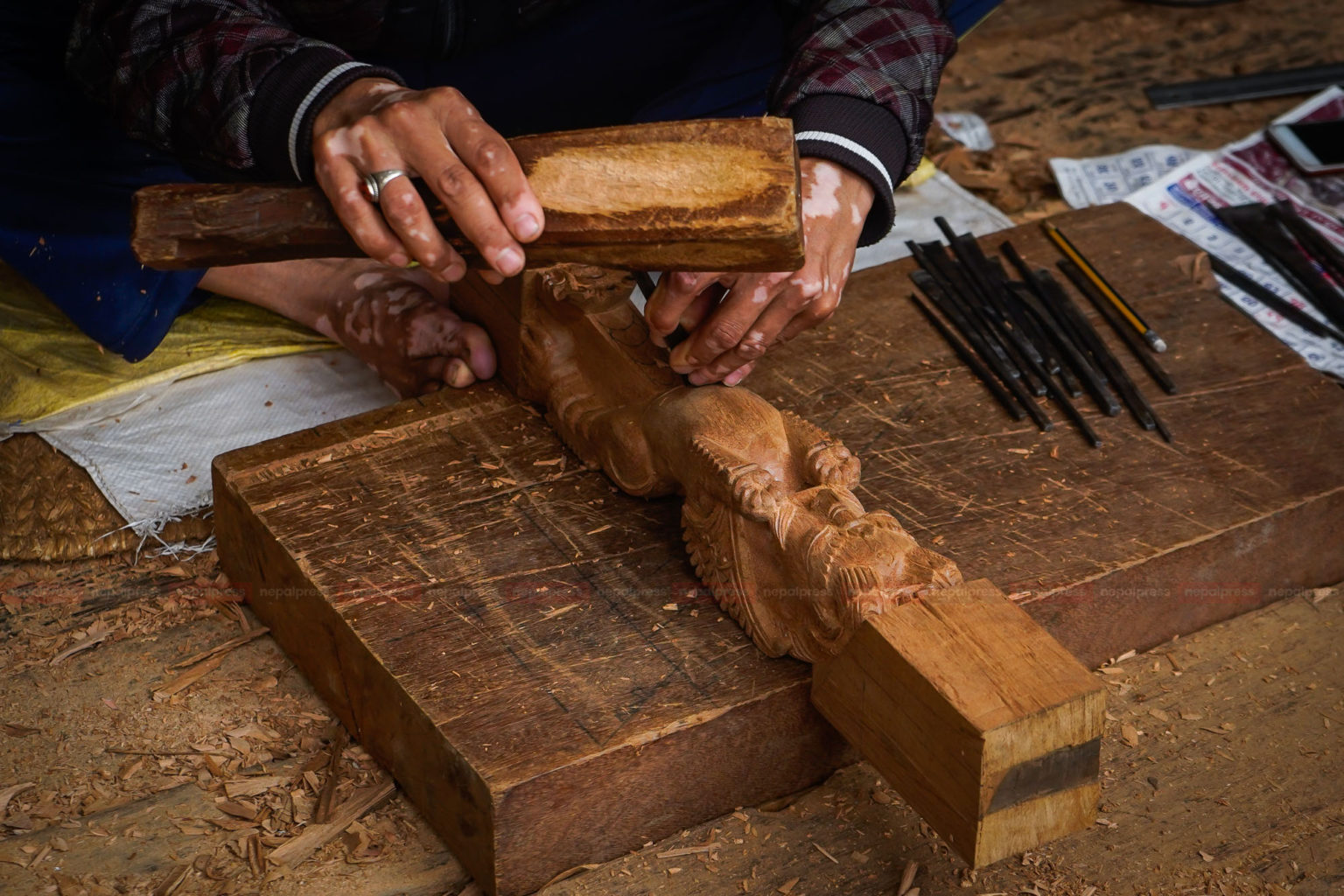 This is how Laxmi Bhakta narrates his experience of repairing temples not only in Nepal but also in Benaras, India.

One day in the year 2056, I was preparing to plant paddy in the field. An official from the archeology department came to see me at home. I was surprised when the officer came to visit! “What happened, sir, why did you take care of my house?” I said in unison. The officer said, “Lakshmi Bhakti, you have been searched by DG Saheb.” Go to the office soon. ‘I was stunned. I also wondered why DG Saheb had sent people home to look for me. I immediately came to the archeology department on a motorcycle. Mr. DG is in his office. Sir first served tea and then started talking – ‘Lakshmi Bhakt, you have to go to Benaras!’

There is a small temple in Banaras like Pashupatinath in Nepal. The temple was built by King Rajendra Bikram Shah of Nepal.

The temple has been undergoing maintenance since 2035 BS. Complete repairs were not completed by 2056.

Many skilled carpenters also went from Nepal to repair the temple. At the same time, my friends and other carpenters from Patan, Kirtipur, Bungmati and other places had reached Benaras. But, I also got the information that I could not work and returned.

“You shouldn’t go back to your place,” he said.

I insisted, ‘I don’t know. None of my friends have been able to build that temple. Why should I go so far and suffer? ‘

The DG said, ‘No, you have to go. If it is not built this time, the temple will be completely destroyed. This is a matter of honor for the country. We will arrange your ticket, food and accommodation. Even if you can’t work, just go and see. ‘

“Sir, I will go after that. Now I have to cultivate paddy.” “How much paddy is there?” Asked the DG.

I then quickly went to Benares. My heart was burning. Went in the car. I couldn’t sleep at night. I kept thinking the same thing – how to show my face to DG Saheb if I have to return without finishing the work!

It was probably 4 o’clock in the afternoon when three other friends and I arrived in Benares. We got there and ate. I didn’t even know there was no salt in the food. There was a lot of tension. With the food, I said, ‘Show me the flame temple.’

I walked around the temple four times and looked closely to see if it could be repaired. The entire temple will collapse if it is not supported properly. That task was not easy at all. That is why the other carpenters could not find a place to rest.

I didn’t remember anything else in my mind. I just looked at the place to lean and grabbed a lump of soil and threw it from the side. Luckily, I went where I thought and was touched by the soil. And if I leaned on this place, I thought that this temple could be repaired without demolishing it.

I immediately went there and asked, ‘Bring these things, I will start work from tomorrow.’

You have to enter the temple from a small street. It was very difficult to bring the goods. But the next day, the donkey’s baggage arrived. But I started working. On the 12th day, I returned to the front door of the temple. The people there were all happy. The day I opened the door, I took a shower and went out to call DG Saheb.

I told DG Saheb that the work had started and I returned the first door. DG Saheb was very happy. He said, “You have kept the dignity of the country.” Return after work. ‘I returned to Nepal after turning four doors in a month. He narrated the schedule of his visit to Benaras. After that, the archeology department started looking for me all the time.

At present, 20 other carpenters and artisans are working under his leadership to build the wooden pavilion. Also, the engineer helps.

In recognition of his contribution to the preservation of traditional Nepali woodwork, he has been awarded the Prabal Janasewa Shri Medal.