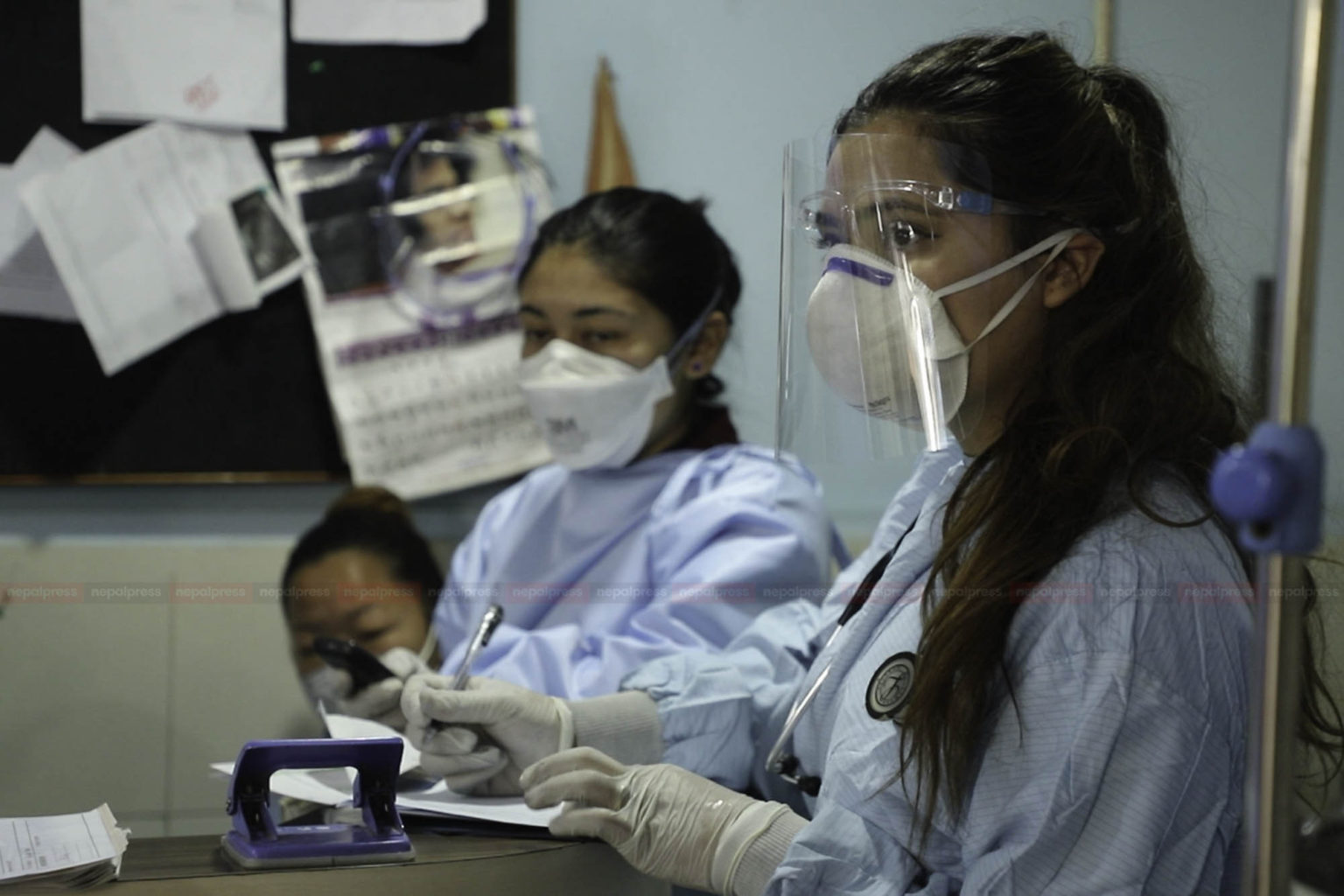 She healed the world from it, but it incapacitated her and her family

KATHMANDU: The moment Dr. Khatiwada had to shed the kind of tears she never had before, she walked home from Alka hospital with a heavy heart as her feet trembled. She startled, remembering her parents on the way. ‘Am I going to make them sick?’ She would wonder.

As soon as she arrived, she would take a shower, sanitize, and then sit alone in her room. 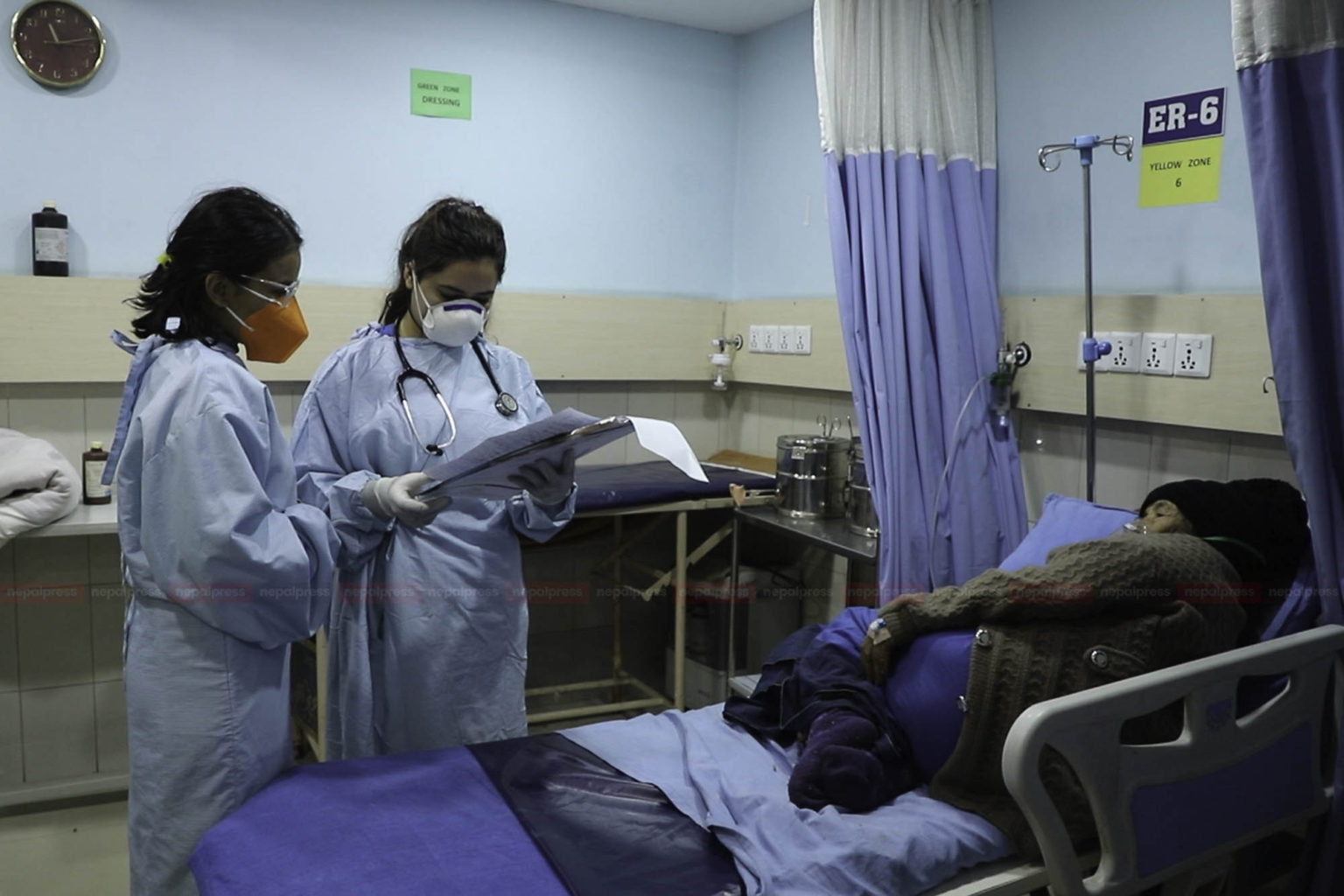 This had become a regular routine. She did not feel pride in being a doctor anymore. Earlier, people used to interact with her and long to build connections. These days, even close friends had become distant.

“Sweekriti is a doctor. Don’t meet her, you will get infected with COVID,” Hearing these words, her heart would break.

The experience was extremely unpleasant. People would fear their white aprons, even while eating lunch. When people asked, I was forced to hide my profession. Neighbors whispered that a doctor lives in this house, and some would even say – “Are you still going to work? You should have left it!”

The same request reflected in the feelings of her parents: “You might get infected from the hospital. Don’t go. Leave it rather.”

Despair would be written all over Sweekriti’s face. In the month of April (Chaitra), some staff started leaving their jobs. She would think, “This is my childhood dream. How can I give up just because of this pandemic? Moreover, this is the time for me to prove myself.”

When COVID-19 had just entered Nepal, citizens were in a state of panic. A lockdown was imposed by the government. Most feared that COVID would spread from hospitals. The same panic worried the staff.

“We would be scared that all patients were COVID-infected. Because of this, we became frustrated with our own profession,” she recalls.

She completed her MBBS from Lumbini Medical College at Palpa two years ago. She then started her medical career at Alka Hospital. From the very start, she was on duty in the emergency room. However, she had never felt such fear in the two years she had worked as a medical professional.

In April, for the first time, a nurse working in the orthopedic department of the hospital was found infected with COVID. As soon as this happened, fear started to engulf all the staff. News was published in the media. Chaos grew as health workers began to get infected. ‘From the hospital to home, there was only fear everywhere. We could not breathe a sigh of relief,’ she recalls.

Exactly what she feared, happened. Initially, her father showed symptoms of fever. He was a 66-year-old patient with diabetes and hypertension. The fever grew to 102 degrees. Sweekriti became skeptical – “Is it COVID?”

She gave her father some medicines. Even after taking it for two days, his fever did not go down. Immediately after, her mother also showed symptoms. She was 57 years old, also a patient of high blood pressure and diabetes. Symptoms included loss of taste, loss of smell, back pain, and persistent fever.

Not a single bed was vacant in the hospital where she was working. Other hospitals were also packed. She decided to treat her parents at home. However, neither of their conditions improved. On the third day, her brother also showed a 101-degree fever. Now, she knew this was COVID. She took all of them to get a PCR test. The report came out – Positive.

At first, she panicked and was confused about what was to be done. The next day, she informed her father, mother and brother that they had tested positive. Everyone panicked. It was an extremely stressful situation. COVID was seen in all her family members except herself. She informed the hospital, ‘Everyone in my house is infected with COVID. I will not be able to continue my duty.’

Then, she started treating her father, mother, and brother. The next day, her father had difficulty breathing. The fever did not subside and oxygen also dropped to below 90.

It was no longer appropriate to keep them at home. She rushed them to a hospital. Her brother’s condition was normal, but both her parents reported chest problems and were diagnosed with pneumonia. Her parents had become very weak. However, there were no beds vacant in the hospital. “I consulted chest physician doctors. They said, ‘The case is critical, we have to admit them.’ “

When she could not find a bed that day, she brought an injectable cannula home and treated her parents. The next day, the hospital beds became vacant. She brought her parents to the hospital early in the morning and started treatment. “At that time, my brother was normal but the condition of my parents was worrying”, she says. “After about 9 days of treatment at the hospital, she saw improvement in her parent’s condition. The oxygen level was also increasing. We planned to discharge them.”

The day before her parents recovered and went home, Sweekriti stopped getting any taste on her tongue, and she couldn’t smell anything. Suddenly, her temperature rose to 103 degrees. She took medicines, but they did not work and neither did the injection. She weakened further.

She was admitted to the same bed on the day her parents were discharged. “This news would make my parents worried. I asked my friends to tell them that I had to work that night. When they went home, I started treatment’, she expressed.

Even as she was ill and bedridden, she kept worrying about her parents. She could not feel happiness over the fact that they had gone home after recovering from COVID.

Suddenly, she had respiratory problems, and her oxygen level reduced to 80/84. She was diagnosed with pneumonia and subsequent chest damage. Her fever had not dropped below 104 degrees for six days, and her blood pressure was extremely low. The infection was spreading, but she had no relatives or family members to take care of her. She thought that she would not live anymore.

Sweekriti had to be kept in the ICU. Her friend, Dr. Samjhana Pokhrel, took care of her and did not leave her side throughout, doing everything in her power to help Sweekriti recover,

In 10 days, Sweekriti started recovering and began to feel more comfortable physically. However, it took her a long time to recover mentally.

Even after recovering from COVID, peculiar problems began to arise. When she was alone, she would stare at the walls, lost in thought. She did not have the enthusiasm to speak to anyone. She became terrified of losing loved ones. She felt internally crushed and as if a mountain was weighing on her. When leaving home on her scooter, her hand would shake, with the fear of death.

“I lived through COVID, but the fear of dying from something else was alive”, she said, her voice breaking. Friends and family were shocked to see this strange nature. She ended up needing psychiatric counseling.

During the consultation, she was diagnosed with auditory hallucinations. “People crying and screaming in the hospital when I was ill had left a deep impact on me. I was terrified of losing what belonged to me, even at the middle of the night in my dreams”, she admits.

Family members were not even allowed to touch the bodies of those who died at the hospital due to COVID, and hearing their wailing cries haunted Sweekriti for many days. Even after she went home, she could not meet her relatives for a while. This also had a profound mental impact on her.

“After the counseling sessions, I recovered mentally. I spent time with my family and started meeting friends. I then recovered fully, and I became normal again”, she says.

Things were very difficult for her and her family for almost a month. She fought not only for herself and her family but also for those infected with COVID that came to the hospital in hopes of the revival of life.

Of course, COVID has not gone away and her responsibility remains intact. However, she has not backed down, as her experience says – “I should not be tired.”