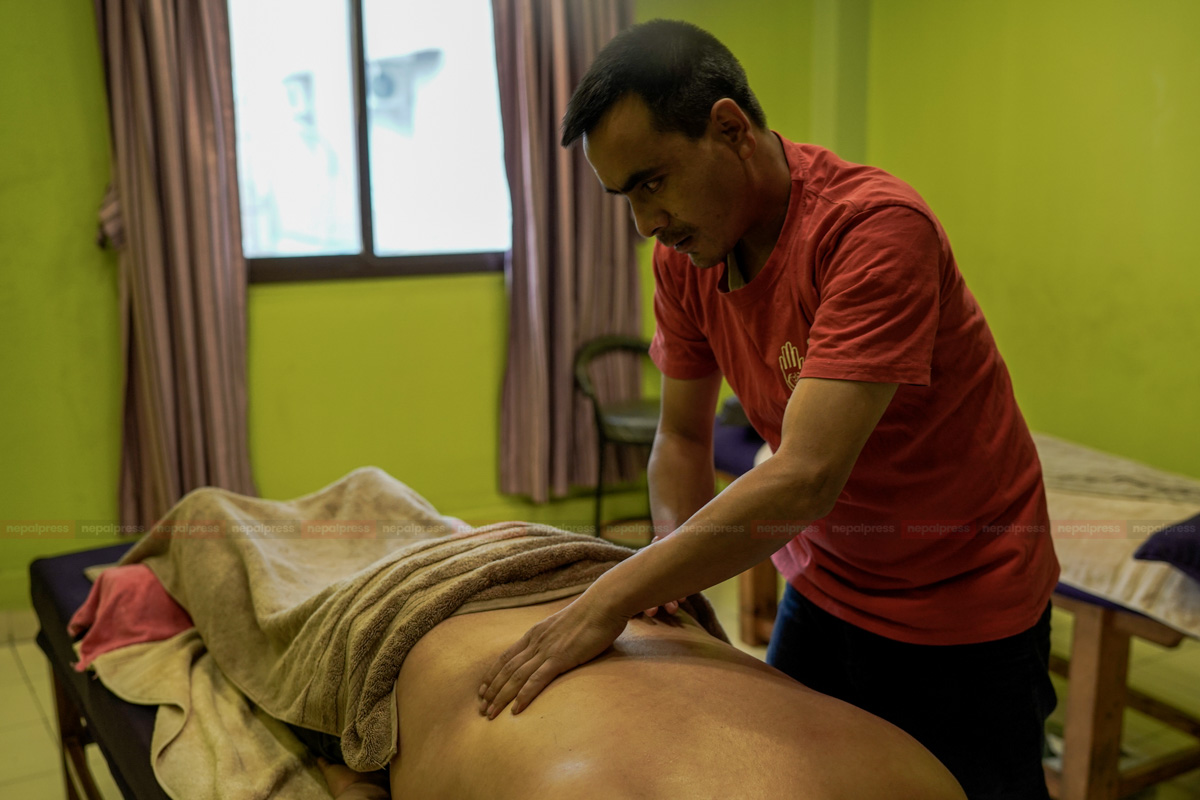 KATHMANDU: Seeing Hands Nepal is a massage centre. Once you reach this destination after traversing the streets of Thamel, a pleasant energy is felt. A bell, along with a cheerful smiling face, greets you warmly at the entrance.

That smiling face belongs to 36-year-old Chiran Poudel. When we reached the massage centre, he was listening to a popular program on his mobile phone, holding it close to his ears.

“Welcome,” Chiran gestured, offering us a seat. Inspecting his ‘Welcome Room’, the introduction of the organization can be seen written in large letters on the wall on the right side – Seeing Hands Nepal, i.e. hands that can see. 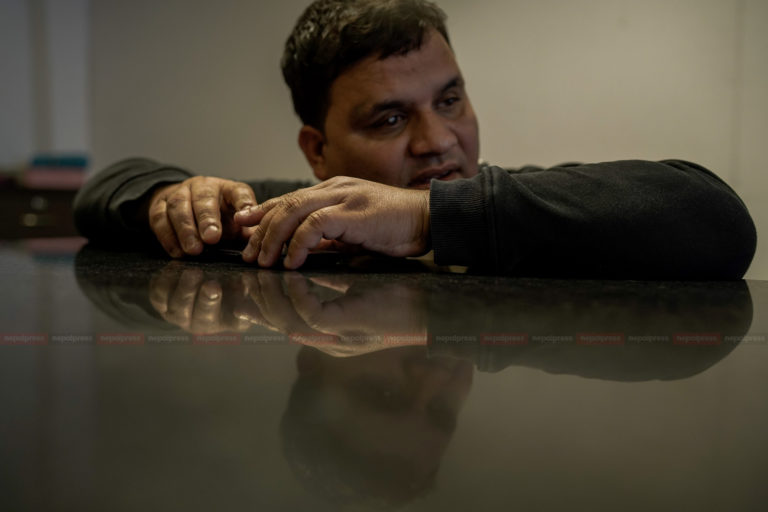 ‘We see, but we see through touch; people’s feelings, pain and problems,’ Chiran initiated the conversation.

Chiran is the CEO here. This facility is not limited to Thamel only, as he has expanded this business to Patan and Boudhha too. In all three places, there are hands that see which relieve pain as well as provide relaxation. Chiran remembers his good friend’s words who sometimes visits from abroad – ‘I have two reasons to come to Nepal. One is Pashupatinath, the other is Seeing Hands Nepal.’

Last year, a foreign professor had said to him, ‘Even in America, I hardly received the kind of treatment I got from this massage.’

These words from foreign guests encourage Chiran and also make him proud of his profession. ‘People are acknowledging our potential, believing in the powerful sensitivity of our hands,’ he said.

Chiran cannot see. However, he has dreamt of creating employment for hundreds of blind people like himself. Even at present, Chiran has provided employment to two dozen people with eyesight impairment in Seeing Hands Nepal. ‘They are all trained physiotherapists who give massages and therapy for clients who come to our clinic’, says Chiran.

Seeing Hands has changed the face of Thamel, which is infamous in the name of massages. Therefore, it has become the first choice of foreign tourists. ‘When I started in Thamel, there was frustration on the faces of many. However, there was no alternative to getting our hands dirty in order to clean the garbage.’ states Chiran.

This is a different kind of professional massage. This skill can only be acquired by doing a one-year course from London. ‘This is a treatment in itself,’ says Chiran.

Chiran himself is an established massage therapist in Nepal. However, he has gone through a 15-year struggle to reach here. Looking at the past, he finds himself frustrated in the dark evenings of Pokhara when he used to make a living by participating in Dohori (a kind of Nepali folk music performance).

The pain of being blind would be felt when extreme humiliation from people who smelled of smoke and cigarettes had to be endured. ‘Is the career of the visually impaired limited to folk music evenings and the teaching profession and nowhere else?’ He would ask himself these questions to which he had no answer, and this would deeply upset him.

No traces of happiness could be found on Chiran’s face even when appearing for his final year B.Ed examinations. ‘There are no opportunities, and there is a lack of belief that exists in the society. I could not go home and be unemployed again,’ he recalls.

Around 2005, a British couple, Rob and Suyanli, arrived in Pokhara with a proposal for a massage clinic. During that time, there was no professional massage in Nepal, and existing ones were slandered. Although Rob himself was a massage therapist, physiotherapist and osteopath in the UK, he had wanted to establish massage as a treatment.

Amid extreme frustration, one day Chiran was told, ‘A new massage center is being opened in Pokhara, where the blind will get employment.’

‘Massage Center… !?’ Chiran had no interest in this. Just a few days earlier, he had read an article in the national daily in which there was a negative portrayal of massages. ‘After refusing once or twice, my mind gave it a second thought – this is better than working in a restaurant singing folk songs, and it must be alright since it is run by a foreigner.’

Then, he participated in interviews conducted by foreigners. Of the 40 blind people interviewed, five were shortlisted, which included Chiran.

Their training began a month after they were selected for the interview. He realized that massage also requires a professional course. As the course progressed, interest in him grew. After gaining a deeper understanding, Chiran realized that the public perception of massage, including his own, was wrong. “In particular, we had adopted a global alternative treatment approach. Another realization was that there are employment opportunities that the blind can partake in, without help from others’, says Chiran.

Blind people were unlikely to become doctors. When Chiran realized that this alternative treatment had adopted medical approaches, he became proud that they too could become doctors.

After completing a one-year course, his work in Pokhara began.

When Chiran started his work, it was not without negative comments. However, these did not affect Chiran at all. He was clear about his profession, and also satisfied.

“There were no restrictions from my family, in which there are four blind people. Instead, everyone became happy after my work started,” says Chiran.

Initially, there were five of them in Chiran’s batch. Later, his friends left and chose a new path. However, Chiran grabbed this opportunity and moved forward with it. Chiran lived and worked in Pokhara for five years. After the diploma, he became an assistant teacher. When the number of therapists increased, he worked as Therapist In-Charge.

“No matter how much work we do, our identity is not formed or recognized in an organization run by foreigners,” Chiran thought during a massage session, one day. He thought, ‘There probably exist different patterns than charities that sell the blind and their names. After a lot of thought, he came to the conclusion that he now has to start something on his own.’

Around 2010, he decided to open his own massage clinic, and chose Kathmandu for Seeing Hands Nepal.

There were special reasons behind starting this business in Kathmandu, one being that there were many blind people in Kathmandu. New jobs could be created for them. As there was no professional massage clinic in Kathmandu, the business could flourish, ”he said.

At that time, only 30 percent of tourists visited Annapurna Base Camp. Most used to visit Kanchenjunga, Langtang and Everest Base Camp. He considered Kathmandu suitable to accommodate those tourists.

The notoriety of massage

Thamel had gained notoriety for massages, as sexual activities would also sometimes be carried out in its name. This was the impression Thamel had on ordinary tourists and citizens. Due to this, Chiran had to undergo a lot of struggle. In the early days, his signboard only read ‘Seeing Hands Clinic’. Right now, it reads ‘Seeing Hands Blind Massage’. He recalls that he was skeptical about the label ‘Massage Clinic’ itself due to the relevant infamousness of Thamel.

There was a lack of support for Chiran, only due to the fact that he is blind. Questions like ‘How can the blind do such a thing?’ would frustrate him. When the clinic opened, the landlord refused to sign the rental agreement in Chiran’s name. ‘The founder from Pokhara had to come and sign the agreement,’ he recalls.

When starting his business in Thamel, people suggested him not to ‘get his hands dirty’. However, Chiran would always respond, ‘You have to put your inside the garbage in order to clean it.’

However, Chiran had to suffer tremendously just to clean up that garbage. In his early days, customers would come up with the wrong idea. Some Nepalese and Indians would ask questions like ‘Can I get a girl?’. Many even intended to cause harm, and would have to be threatened by the police.

In the beginning, he was also agitated. ‘However, we needed the location to be Thamel, the hub of tourism, itself because at the end of the day, this is a professional massage center which tourists will visit.’

For a while, even the police did not stop chasing him. ‘The police used to inspect us from morning to evening, which would increase levels of anxiety ’, he recalls.

Seeing Hands has won many international and national awards. The organization won the Surya Nepal Asha Social Entrepreneurship Award in 2012, after which many media houses introduced Seeing Hands to the community with a unique identity. ‘Only then, people started to understand that massage is a treatment method and that the blind can also do it,’ says Chiran.

With the success of his business, Chiran opened a second clinic in Patan, Lalitpur in 2014. Three years later, in 2017, he was able to establish another clinic in Boudhha.

Enthusiasm grew in Chiran as he achieved commercial success, and he wanted to further expand his business. His plan was to set up another clinic in Bangkok or Everest by 2020. However, the worldwide COVID-19 pandemic halted his plans.

The business plummeted after foreign tourists were restricted from coming. ‘At one point, more than a thousand clients used to seek service every month. Now, that has dropped to zero due to the coronavirus,’ states a concerned Chiran. Since it costs millions just to pay rent, his hard-earned money is running out.

Even though the COVID situation is slowly getting back to normal, the tourism sector has not been revived, due to which Chiran is directly affected. ‘We paid the rent for a certain period of time. In Lalitpur, an agreement has been made to not pay rent until business gets better. The other clinics are being operated only through loans.’

Chiran also has a hard time receiving loans. ‘Banks do not provide loans to the visually impaired. In fact, even accounts cannot be created. Hence, there is an obligation to manage through personal loans’, he says.

Problems at this time are numerous, but hope is not lost. Chiran does not want to escape struggle. Instead, bigger dreams are in the making. Once the situation returns to normal, tourists will definitely arrive as they used to. Through therapy, they shall release their stress and grief in Seeing Hands Nepal and will return with the same satisfaction as in previous years. A smiling Chiran, welcoming us at his entrance, also knows that they will go to their respective countries and relay his story – the story of hands that see!